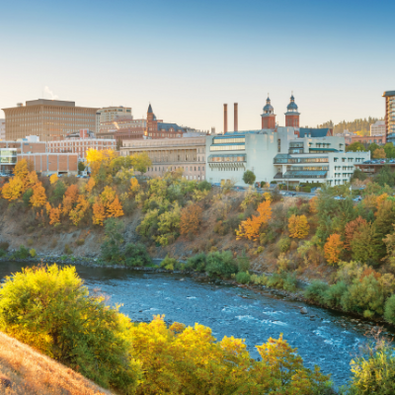 Everything You Need to Know Before Moving to Spokane, WA

If you love an urban feel but don't want to live in a concrete jungle, Spokane may just be the town to relocate to. Spokane's downtown features a spectacular waterfall, second only to Niagara Falls on the list of urban waterfalls in the country.

But if you want more than a waterfall as a reason to relocate to the city that gets its name from the Salish word "Spokan" (Children of the Sun), of course, you want something deeper.

Whether you're moving for work, fun, or want to build a new life in a new city, we've been up and about, collecting all the important information about Spokane. Read on to find out all you need to know about moving to Spokane, Washington.

Spokane is found in Spokane County, Washington, and has a population of 227,620. The Spokane metro area is home to 452,000 people. Spokane residents are predominantly white making up 84.66% of the total population. People with two or more races make up 5.91% of the population, while Native Americans account for 1.78%. Other races account for 1.74% while Native Hawaiian or Pacific Islanders account for the least percentage at 0.88%.

Moving to Spokane comes with the perks of cheaper living costs. Spokane's cost of living index is 92.3% which is 7.7% lower than the US average. The median price for a home in Spokane is $365,000 (as of August 2021) which is more affordable than the country's median home price of $380,271.

Utilities such as power, heating, cooling, and garbage for a 915sq ft. apartment amount to about $141. You need about $64 for the internet bill and $255 for food, which is slightly above the national average of $252.

The Job Market in Spokane

Experts have projected a future job growth rate that is only 1/10 of a percent less than the national average over the next decade. These experts believe Spokane's job market will grow by 33.4% just 0.1% lower than the country's average of 33.5%

The Government is the biggest employer in Spokane which divides its workforce between the public schools, the State of Washington, and the US Air Force. The medical industry comes in second, with the top medical employers being Providence Sacred Heart and Children's Hospital.

It's hard to miss railroad-era architecture that adorns downtown Spokane. The city's public commuters are served by the Spokane Transit Authority. Each bus ride costs $2 or $60 for unlimited bus rides for-great value pack if you move about the city a lot. You can also opt for the shuttle park rides for $40 monthly. The shuttle service offers an excellent way to keep out of parking trouble. You can catch a ride every 10 minutes.

If you'd love to travel alone, Uber and Lyft are popular options. Did we mention you can get limo and airport shuttle rides too?

Spokane is a northern city which means the climate is marked by cold winters and warm summers. The average annual temperature is 26°F to 88°F and rarely falls below 11°F or rises above 97°F.

The hottest period in Spokane lasts for 2.8 months and goes from mid-June to mid-September, with the average daily temperature rising above 78°F.

The cold season lasts for 3.3 months, from mid-November to late February, with an average daily high temperature being below 45°F. The coldest day of the year is December 30, with an average low of 26°F and a high of 34°F.

Things to Do In Spokane

Spokane has often been termed the best of the Pacific Northwest. It's not an exaggeration. It is teeming with nature and a climate made for a big appetite for the outdoors. Check out this list of places to visit and things to do, once you're all settled in from moving.

There's something to feed every preference at River Park Square. The spectacular park spans 100 acres of dry land and water and serves a central point for festivals.

Pig Out In The Park and Maytober Fest are the most popular festivals. Locals and tourists love relishing the sight and sound of the waterfalls, testing their basophobia on the suspension bridges or enjoying rides on the gondola. You can find both local and international stores inside the park, plus dozens of entertainment points.

The Centennial Trail is popular with hikers and bikers who live in and around Spokane. It stretches for 37 miles from the border state line between Washington State and Idaho, to the Nine Mile Falls–the proud Washington State symbol. There's no car in sight on this trail. It's common to see people horseback riding or canoeing on the bordering Spokane River.

The Riblet Mansion sits 400 feet above the Spokane River offering sweeping views of the ground and the Spokane Valley. You can enjoy these sights while enjoying a wide range of wines, beers, and food from the Arbor Crest Winery on-site. The Riblet Mansion grounds are popular for concerts and picnics during summer.

The Mica Moon zip tours are an out-of-this-world adventure. Geologists and biologists teamed up and created infinite chances for the adventurer to take zip line trips through the dense Spokane forest. The guides are great at what they do, so you'll have great and safe fun.

Spokane knows just how to entertain revelers. Big artists frequent the Spokane Arena, the Northern Quest Resort & Casino with almost always sold-out events. The Spokane Comedy Club and the Blue Door Theatre offer hilarious experiences for Spokanites with a funny bone. If you'd like some live music performance, go to the Knitting Factory, the Lucky You Lounge, or Zola. Get cocktails at Bistango or Cease and Desist Book Club.  Head to The Satellite Diner or O'Doherty's Bar & Grille for late-night grub or a round of beers.

We found some neighborhoods you should definitely be on the lookout for when you move to Spokane.

Browne's Addition is built around Coeur d'Alene Park with a historic feel that's hard to miss.  You'll also find many historic mansions here.  Some of the people who moved to this neighborhood in the 1990s transformed these mansions into multiple-unit apartments and single-family homes. When it comes to amenities, Browne's Addition almost has it all - huge grocery store, pubs, and restaurants fit for big nightlife appetites, coffee shops, bakeries, parks, and B&Bs.

Spokane's downtown neighborhood is where big retailers live and the neighborhood is literally fed by these businesses. You'll find Apple stores, Nordstrom, and Banana Republic. But these aren't always the show stoppers here. If you love tattoos, you have plenty of parlors to choose from, plus, there are lending firms and pawn shops for when you need quick money. Locals never run out of things to do in the nearby River Square, from eating out to shopping and reveling.

West of the hustle and bustle of Downtown Spokane is Peaceful Valley, a neighborhood that truly deserves its name. This neighborhood is brimming with peace, created by the residents and the natural features around it. It sits at the bottom of Spokane River Gorge-Latah Creek and Spokane River.

Pros and Cons of Living in Spokane

Because no city is all gloom or all glam, we've compiled a list of pros and cons for you to consider before moving to Spokane.

When you're ready to move to Spokane, College HUNKS Hauling Junk & Moving is here to help. From packing to junk removal, our moving and junk removal specialists have you covered every step of the way. Get in touch with us to get started.