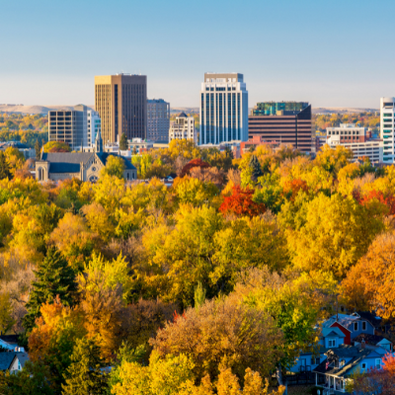 Everything You Need to Know When Moving to Boise, Idaho

Idaho state is nicknamed the Gem State—and the rich moniker has clearly had a positive impact on its largest city, Boise. Before we get to the nitty-gritty, there are a few essentials you need to know about the city.

First off, Boise is hot, and we aren't referring to the weather. Forbes magazine ranked the Idaho capital the fastest growing city in the United States in 2018. In 2019, it was ranked as the best place for millennials to settle down and bring up families. Even after a pandemic that ravaged the entire planet, the city of Boise remains strong, and its popularity among millennials has not waned.

Boise is a city of millennials. It is shaping up for new-age professionals fed up with the bustle, noise, pollution, and congestion of major cities in California, Utah, and Washington DC. A string of trendy coffee shops, restaurants, malls, and recreational facilities has made Boise the biggest attraction for new people looking for the best place to live and grow.

Is Boise, Idaho, the right city for you to move to? Read on to find out.

Boise has only become popular over the past couple of years. Despite its popularity among millennials, it is still a relatively small city population-wise. The area on which the city sits on, however, is a different story.

The city's expansive area, broadly referred to as a Treasure Valley, is a large area covering over 4.7 million acres and sparsely inhabited by as many as 300,000 more people. Thanks to the expansive green spaces and the vibrancy of the state of Idaho, some people actually move into and choose to live just outside the city of Boise.

Culture and Way of Life in Boise

Boise is a western city, rich in the 'old west' traditions and culture. Agriculture is at the heart of the city's history and firmly a part of its culture. A large part of the city's history and culture is also filled with tales of entrepreneurial ways of life; business and investment have grown to challenge agriculture as the leading economic activity. Today, you will find companies from all industries of all sizes and shapes striving to make Boise a better place to live.

Boise receives an average of 13 inches of rain per year, much lower than the US national average of 38 inches according to WeatherSpark. The summers are hot, dry, and last for about 3 months between mid-June and early September. The winters are very cold and gloomy and last for about three months between mid-November and late February. The temperature oscillates between 24°F to 93°F and is rarely ever below 10°F or above 101°F.

Boise has become a magnet for young people searching for a tight-knit community in which they can bring up a family affordably. The city is perfect because it offers easy access to the outdoors, excellent job opportunities, and is one of the safest cities in the world. The median age of the city may drop drastically over the next decade as more young families choose to move to Boise.

Public transportation is very limited in Boise. The bus system is lacking, and it is one of the major downsides of living in the city. If you are considering moving to Boise, you'll want your own car to navigate the area with.

Boise has only one freeway. However, the commute time is much lower than the national average, thanks to good roads and a low population density. The freeway has many exits that go a long way to prevent traffic congestion, especially during rush hour.

The city streets of Boise are okay for cyclists but mediocre for walking. While the area the city covers is small, it is still too big of an area to walk from one end to another. There are nature trails connecting different parts of the city, but they are only great for casual strolling and jogging, not making time to work. If you do not have a car, you can use Valley Ride to get around and out of town.

The state of Idaho boasts of a very diverse economy. The state's economy is mainly supported by industries based on the extraction of natural resources, including agriculture, mining, and forest products. In the city of Boise, the economy has taken a different, sharper turn. The greatest income generators are information technology services and products, retail trading, tourism, business and entrepreneurship, and healthcare, just to name a few.

Boise has one of the lowest unemployment rates in the country, standing at 2.9% (August 2021); the US national unemployment average is 5.2%. Over the last year, the job market in Boise has grown by a whopping 3.6%. It is further predicted to grow to 5.9% over the next decade compared to the national US average of 3.5%.

The top employers in the city include:

Education and Schools in Boise

One of the top reasons millennials are flocking to Boise to start their families is the quality of education that the schools offer. There is a great number of elementary and middle schools within reach of every neighborhood. There is also an impressive number of high schools if you are looking for K-12 schools. Thanks to this solid basic education infrastructure foundation, the city has some of the best trade schools and higher education institutions in the Northern Pacific.

Boise State University (BSU) is the pride of the city. The university offers over 200 fields of study to over 22,000 students from all over the world. The university has consistently ranked among the top 50 most innovative educational institutions in the country. The university is conveniently located along the banks of Boise River and has a highly rated football team that receives a lot of support and admiration from the locals.

Are you wondering how it is like to live in Boise, on your income? MarketWatch ranked Boise as one of the best and most affordable places to live in the US in 2019. The sharp rise in the cost of living following the Coronavirus pandemic forced rental prices in Boise by as much as 48% according to Zumper. The average cost of renting a one bedroom apartment in the city is $1,553 per month, as of October 2021.

Boise is certainly cheaper when it comes to utilities than any other city in the Northwest region. Electricity costs as much as 30% lower than the national average; the average water bill is just $100 per month for a typical household and internet and cable costs between $20 and $100. Natural gas is abundant in Idaho and costs residents about $40 a month. Sewer and trash disposal should cost your household between $20 and $50 each.

On the Northern end of the town, you will find a trendier part of the city, with notably older but beautiful homes and classy restaurants dotting the streets.

On the Eastern end of the Foothills are neighborhoods closest to the city's many natural attractions. If you are looking to buy a condo or build a home, this is the region to check out. This is the part of the city with the state's most expensive high-end homes.

The suburbs of Boise are located on the Western end of the city. Here, you will find the most reasonably priced homes and apartments that offer easy and convenient access to the downtown. Most notable in these neighborhoods are nature trails that connect the neighborhoods to the central business district, downtown, and other parts of the city.

The Boise Bench refers to an elevated area to the south of downtown Boise. This is an up-and-coming area with new but quite affordable homes in the city.

Ready to Make the Move to Boise?

Throngs of millennials, conscious of the environment and seeking the best places to raise their families, have significantly elevated Boise. The explosive growth is sustainable, and the city is welcoming newcomers to visit, invest in, and live in Boise.

If you are planning on making a move to the City of Trees, we hope this information has helped you learn more about its people, and the neighborhoods. When it is time to make your move to Boise don't hesitate to contact College HUNKS Hauling Junk and Moving to help make your move as smooth and stress-free as possible.