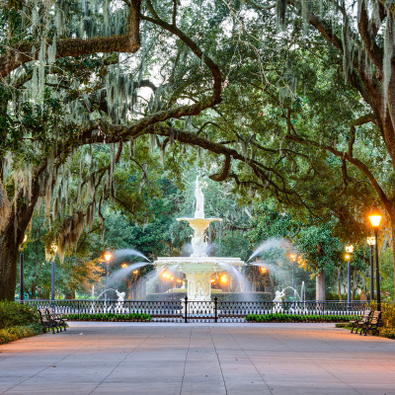 Everything You Need to Know When Moving To or Around Savannah, GA

Nicknamed the "Hostess City of the South", Savannah, Georgia is a green, sun city laced with elaborate iron art and rich in pre-colonial and modern architecture. It is a thriving city with so much to see and do. Friendly and welcoming citizens are ready to receive anyone considering moving to Savannah.

General James Oglethorpe settled in the area first in 1733 and later established a settlement, making Savannah one of the oldest cities in the country. It also prides itself on being one of the first planned cities set up on square grids. The city had 24 squares originally, and 22 of them are still there today.

Historic preservation of the city saved many iconic buildings and architecture that form a part of the city's landscape. The city also thrives on its connections with film and literature. If you read the book 'Midnight in Garden of Good and Evil' or watched the movie "Forrest Gump," you probably know something about Savannah, GA, that most people do not.

There are many answers to the question of "Why move to Savannah, Georgia?". Here is a breakdown and summary of everything you need to know before you start packing.

According to the United States Census Bureau, Savannah had a population of about 145,000 in 2019, with the median age of the city residents being 32.4 years. The largest ethnic group in the city is African-American, making up more than half of the city population at 54%. Non-Hispanic whites make up about 36% of the residents, while Hispanic whites make up 3% of the population. Other smaller ethnicities, including American Indians or Alaskan Natives, Asian, Native Hawaiian, and Pacific Islanders make up the remaining 6% of the population.

Many millennials are moving south to Savannah, and other cities in Georgia and Florida because of the temperate weather. When you move to Savannah, you will love the welcoming weather, especially if you have had to put up with a colder climate up north. The city's weather is so friendly, that the temperatures often average 50 degrees at the peak of winter.

Savannah's climate is sub-tropical, meaning that while the weather is nice most of the time, summers can be brutally hot and humid. The summers can last for nine months, between March and November, but the city still receives considerable rainfall. Being a coastal city, Savannah is at risk of hurricanes. However, no previous hurricanes have caused any significant damage in the city since Hurricane David swept through the town in 1979.

Cost of Living in Savannah

The cost of living in Savannah, Georgia, was about 10% lower than the national average, according to statistics published on PayScale. While the ultimate cost of living will depend on many factors, you can expect to pay less for housing and healthcare, especially if relocating from the north or the west coast. The average selling price of a single-family home within the city ranges between $200,000 and $300,000.

The rental price for a one-bedroom apartment in most neighborhoods ranges between $700 and $1,200, with most residential buildings offering essential amenities such as parking, pools, and clubhouses for residents. While you could pay an average monthly total of between $70 and $200 for all utilities, the cost may spike as high as $300 in the hot summers because of the higher AC use.

If you are hoping to land a career-defining job once you move to Savannah, you should celebrate now that the city has such a healthy job market. According to US News, it has an unemployment rate of 3.2% based on 2019 statistics and a vibrant job market index score of 64%. The average annual salary for employees in the city is $44,480, which is considerably lower than the national average of $51,960.

The largest industries in the city are the Port of Savannah, manufacturing, tourism, and military. Every year, the city receives as many as 12 million tourists who bring in over $2 billion in revenues, helping keep the unemployment rates in the city low. The top employers in Savannah include:

It is very easy to get around in Savannah city. The pre-colonial foresight that led to the early planning of the city means that the town center is a very pedestrian-friendly place. There are many attractions, most of them grouped in small areas all over the city. Residents have normalized casual biking and strolling while sightseeing the city or exercising.

According to the League of American Bicyclists, Savannah is one of the top bike-friendly communities in the country. With its unique public bike loaning system, you do not even need to own a bicycle to ride one.

Savannah's public transportation system is a simplified but efficient intra-city transportation provided by the Chatham Area Transit. There are fifteen bus routes crisscrossing the city and the Downtown Transportation (DOT) system, a free shuttle service that you can catch every ten minutes. Commuting workers are well accommodated, and the roads are in excellent condition for users who prefer to get around in their cars.

Savannah is an old area best known all over the United States for its ornate metal arts decorating the city, well-preserved architecture, and vibrant history. The city offers an abundance of cultural activities, including art displays, dance performances, and community events. Some of the most popular cultural events in the city are the Savannah Orchestra, the Savannah Dance Theatre, and the Savannah Philharmonic.

Visitors to the city are often awed because Savannah is a city with a little bit of everything. The Savannah International Trade and Convention Center, for instance, is famous for hosting trade shows and commercial events. If you are more into art and history, be sure to pay a visit to the Telfair Museum of Art, the City Market located in the Historic District, and the Ships Museum of the Sea, among other attractions.

Food and Restaurants in Savannah

While Savannah is popular for its rich history and art, much of its culture is actually food. You can find almost anything you have a taste for in the many eateries and restaurants dotting the city. For instance, the five foods that are considered local delicacies you must try are fried green tomatoes, shrimp and grits, Chatham Artillery Punch (a champagne cocktail), pralines, and peaches.

You can explore cost-friendly dining in restaurants along River Street for lunch or stay home and order seafood delivery from the dives close to the coast. However, the most impressive are the sidewalk cafes and eateries that bring the city residents together to snack and foster a feeling of belonging.

The county public schools in Savannah have an enrollment of close to 40,000 students across the elementary, middle, K-8, and high schools. The city also has four higher education institutions, including Savannah State University, South University, Savannah College of Art and Design, and Armstrong Atlantic State University. The city is also home to a campus of the famous Georgia Tech and Georgia Southern Universities.

Where Should I Move To In Savannah?

Thanks to its early planning, Savannah is a large and spread-out city. This means that different neighborhoods in Savannah can feel like worlds apart despite being in the same city.

Downtown and Midtown Savannah are the most urbanized areas of the city. There are countless restaurants, shops, offices, and businesses close to each other. These are also the places you will find most of the historic buildings dating back to the 16th century. The most notable neighborhoods in this part of the city include Parkside, Habersham Village, Ardsley Park, and Kensington Park.

To the south of the city, the landscape is more open, and you will come across more chain shops, malls, and fast-food restaurants than the downtown and midtown neighborhoods. It is also the go-to part of town for people looking for lower parking fees and affordable personal services such as massages. The Southside is considered Savannah's commercial district, where you can shop and eat in a homely environment.

The west side of Savannah city is best known for its competitively priced real estate. If you are looking to invest in a house, this is probably the first part of the city to consider. Richmond Hill is the most popular neighborhood in the west, with deep water for boat access.

Savannah, GA is a vibrant historic city highly welcoming to people relocating from elsewhere. If you are considering moving here, we hope that this summary of things to know has helped you appreciate the city even more. As you plan, strategize and budget, remember to factor in the process and logistics of the actual move. Contact College HUNKS Hauling Junk and Moving should you need advice or more information on making your move fast and stress-free when the time comes.