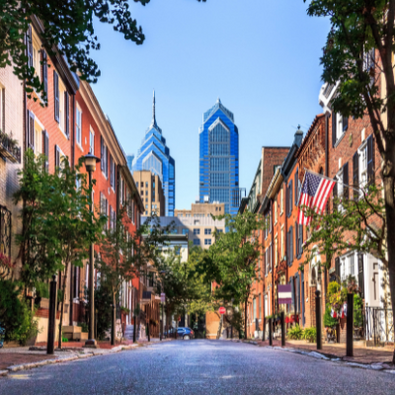 Everything You Need to Know When Moving To or Around Philadelphia

You may know Philadelphia for the cheese steaks or the history or perhaps the buzzing arts scene. Vibrant and full of heart, Philly can be an awesome place to visit and a wonderful place to live. Is it the right place for you? If you're considering moving to Philadelphia, here's everything you need to know.

Who Lives in Philadelphia?

Philadelphia is home to an estimated 1,584,064 people with a population density of 11,379.5 per square mile, making it one of the most densely populated cities in the U.S. Accordingly, that population brings an enormous amount of diversity. Here's the racial breakdown of who lives in Philadelphia:

The most-common non-English languages are Spanish, Chinese, and Vietnamese.

Income and Cost of Living in Philadelphia

Similarly, while housing is slightly more expensive than the national average, it is relatively inexpensive when compared to similar cities. The average monthly rent for a one-bedroom apartment is $2,132. (as opposed to $3,236 in Boston or $3,089 in NYC). The median sale price for a house is $260,000, notably less than the national median of $353,048.

So, all in all, Philadelphia trends toward a higher cost of living but offers a less expensive alternative to east coast living.

Finding a Job in Philadelphia

The job market in Philadelphia remains on par with the rest of the country. The Philadelphia unemployment rate is 8.5% (as of May 2021), and continues to decrease. As a hub for healthcare and education, the city's top employers include institutions like the University of Pennsylvania and Thomas Jefferson University Hospitals. Additionally, Comcast, Urban Outfitters, Crown Holdings, and Aramark have headquarters in the area.

In addition to the University of Pennsylvania, there are many well-regarded colleges in the area, including Drexel University, Temple University, Haverford College, and Swarthmore College. 85% of Philadelphians over 25 have a high school education or higher, and 30% have a bachelor's degree or higher.

Commutes are long in Philadelphia, with the average commute clocking in at 33.1 minutes (one of the highest nationwide). However, there are many options for transportation.

Philadelphia has remarkable public transportation—most residents' preferred way to get around. The public transit system, SEPTA, shines as one of the best in the country, utilizing a mix of buses, subways, commuter trains, and even trolleys for access throughout the city.

Plus, Philadelphia often finds a place among the most bike-friendly cities in the U.S.

However, when it comes to driving, there's much to be desired. A recent report ranked Philadelphia 5th in the world and 2nd in the U.S. for the most traffic congestion. The morning rush hour hits around 6am, and evening rush hour begins around 3-4pm. Parking in Philadelphia can also be a major pain, as most residences don't have off-street parking.

Finally, Philly is a very walkable city, and its street-grid makes it easy to navigate. It has a Walk Score of 79, indicating a "Walker's Paradise" wherein most errands can be completed on foot.

When you move to Philadelphia, you'll discover an exciting cultural scene filled with great food, art, and nightlife.

Philly's restaurant scene stands out as an absolute gem. With better prices and accessibility than neighboring NYC, many up-and-coming chefs and restaurateurs choose Philadelphia as a place to launch new ideas. Meanwhile, the diversity of the city's population contributes to an eclectic mix of cuisines. From classic cheesesteaks by Tony Luke's to Michael Solomonov's award-winning Zahav, there's always something delicious on the menu.

You'll also find hopping nightlife in Philly. A typical night out includes hanging out at a bar with your pals and a beer. Dive bars and sports clubs are at the heart of the scene. Yet if clubbing's more your style, the city has plenty of clubs, too.  Even better, a night out in Philly is known to be cheap.

The indie arts scene in Philadelphia is one-of-a-kind. From poets to punk rockers, the city is a haven for artists, so there's always something new to experience.  Meanwhile, Philly features an array of top-notch museums, from the Mütter Museum to the Philadelphia Museum of Art. For date night and beyond, there's no shortage of things to do in Philadelphia.

Even though it's definitely an urban center, Philly has plenty of outdoor activities. The Schuylkill River Trail runs through the heart of the city, providing a marvelous route for runners, walkers, and cyclists. In addition, the city has a great array of parks and public squares that encourage residents to come together in good weather.

Plus, of course, we can't talk about Philadelphia without mentioning its massive love for sports. Come prepared to root on the Eagles in football, the Phillies in baseball, the 76ers in basketball, and the Flyers in hockey.

Where to Live in Philadelphia

Philadelphia is defined by its neighborhoods. Each brings its own personality, offering a wealth of choices depending on the experience you're looking for. Here's a glimpse at a few of the city's top neighborhoods to consider when moving to Philadelphia:

Philadelphia's main downtown, Center City, is an umbrella term for a few different neighborhoods including Rittenhouse Square, Chinatown, and Old City. Here, you'll find all the historical monuments that draw visitors to Philadelphia, as well as a festive dining and entertainment scene.

If you're looking to live in the heart of city life (with an easy commute to Philly's educational and healthcare institutions), University City has a lot to offer. With its location adjacent to the University of Pennsylvania, Drexel University, and others, it's a great option for young professionals and recent grads. Plus, the historic architecture and Clark Park give it lots of character.

Fishtown has a reputation for being a young and hip neighborhood in Philadelphia, offering a lively scene that's continuing to grow. Formerly a working-class neighborhood (named for the commercial shad-fishing industry), it's got a distinct old-to-new vibe, characterized by rowhomes and a bustling mix of bars, restaurants, music venues, and more.

When you're dreaming of a beautiful neighborhood that is not quite in the middle of the action, Chestnut Hill might be for you. Sometimes referred to as Philly's garden district, the neighborhood features gorgeous Victorian homes and tree-lined streets alongside charming bakeries and boutiques.

How to Move to Philadelphia

Moving to a new city comes with extra tasks and expenses that you should factor in. Here's a quick checklist for new residents:

If you're already in the Philadelphia area and looking to move to a different part of the city, there are still a few things to keep in mind when you're moving:

Should I Live in Philadelphia?

When you're deciding whether to move to Philadelphia (or any new city) it helps to look at the pros and cons.

To sum up, Philadelphia boasts a unique vibe, offering all the amenities of being in a major East Coast city, at a fraction of the expense of neighboring metropolises like NYC. Sure, there are other places in the country that are cheaper, more car-friendly, and have higher incomes. Yet, there's a lot going on in Philly, and with every neighborhood offering something different, there are many paths to making the city feel like home.

When you're ready to move to Philadelphia, College HUNKS Hauling Junk & Moving is here to help. From packing to junk removal, we have you covered every step of the way.  Get in touch with us to get started.