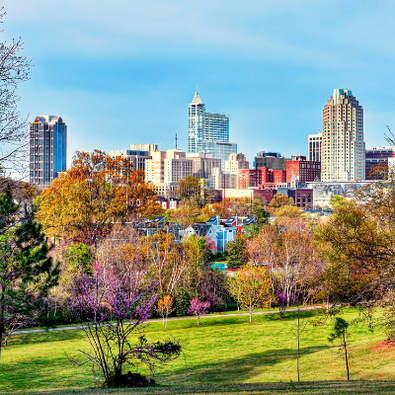 If sunny skies and warm weather are calling your name, moving to the Raleigh-Durham area is an excellent opportunity to bask in the heat of the south. North Carolina might be known for its sandy beaches, but the area is full of all kinds of natural beauty. Raleigh welcomes residents with quaint, oak-lined streets, historical architecture, and a booming job market. Living in Raleigh will put you smack dab in the middle of all the adventures North Carolina has to offer with its miles of beautiful coastline, fabulous cities, quaint college towns, and gorgeous mountain ranges. Just outside the city you can find any adventure you're seeking, and it’s an easy day-trip-drive to either the beach or the mountains.

If you're thinking of moving to Raleigh—whether you're making a long distance move,  moving across town or even the state—you'll want to know more about the area. Before you make any decision about relocating to Raleigh, Durham or the surrounding areas, take a look at some key facts.

According to the US Census from 2019, the population of Raleigh is roughly 474,000. So, while Raleigh is definitely a city, you won't feel like you're overwhelmed with people everywhere you go. Additionally, Raleigh is full of towering oak trees lining its streets, so it never feels like a concrete jungle. Although it is the second-largest city in NC (after Charlotte) it definitely has some small-town charm to it.

The city can be broken down into the following demographics:

According to Payscale.com, in 2020 the average cost of living in Raleigh was 5% less than the average cost nationwide. This means that a move to Raleigh may just be saving you money in the long term. However, while groceries and electricity might ring in a little lower, North Carolina taxes make a difference because North Carolina is one of eight states with a flat income tax. So, no matter what threshold of income you make, you'll pay the same amount of taxes. In fact, North Carolina has the highest flat tax rate at 5.25%. That said, other states have much higher income taxes in their various tax brackets.

Jobs with big-name tech companies are prevalent in the area, with a secondary source of employment being the largest research park in the United States (housing over 200 companies). Top employers in the area include tech giants like IBM and Lenovo.

Raleigh is regularly listed on the "top places to live" lists compiled by media. In fact, Realtor.com named Raleigh one of the most affordable alternatives to trendy cities like San Francisco—based on quality of life and cost of real estate. Like San Francisco, Raleigh has great weather, tons of technology-related jobs, and a happening restaurant scene.

What Makes Raleigh a Great Place to Live?

As you know, moving to a new city involves more than just a look at the numbers. You'll want to know exactly what living in a new city will be like. What area attractions are the most popular? What is the restaurant scene like in Raleigh, NC? What do people do for fun? What up-and-coming neighborhoods are in Raleigh? Raleigh is a vibrant city with lots to see and do no matter what your interests or hobbies may be and has a neighborhood to suit everyone's needs.

Often referred to as "Midtown" by the locals, this area claims to have more than 40 restaurants in a single half-mile stretch. It's also a great place for shopping with its boutique shops and The Crabtree Valley Mall. Lots of recent, residential renovations have happened in this part of town making it seem new again.

Located directly between Raleigh and Durham, and just north of the Cary-Apex area, Brier Creek is a gorgeous and fast-growing neighborhood. You'll find lots of single-family residences and condominiums, which have been built in just the last five years. Its proximity to the highway gives it easy access to Raleigh's international airport and other areas of the Triangle.

If you're looking for a neighborhood feel but also like to be close to downtown, then Oakwood is the place for you. Known for its beautiful gardens, tree-lined streets and Victorian homes, it's a really pretty historic neighborhood. Then, with just a short walk you can find yourself in the hustle and bustle of all that downtown has to offer.

College basketball is pretty popular in Raleigh due to the number of excellent universities in the area. Fans have their choice to root for: UNC, the Tar Heels or Duke.

Raleigh is also home to a professional ice hockey team, The Carolina Hurricanes.

Skiing and Snowboarding are something you will find just a short drive from the city center. Winterplace, Sugar Mountain, Ski Beech, and Snowshoe are all great resorts for hitting the slopes, and offer adventure for the whole family.

There are lots of places within Raleigh to enjoy kayaking, stand-up paddle boarding or canoeing. Plenty of free boat launches nearby make getting out on the water an easy weekend activity for city dwellers. If you're looking for some paddling fun, a little exercise, and a great way to soak up the sun, Raleigh's waterfront parks are the way to go.

Residents of Raleigh can take part in parks and rec programs city-wide by participating in various other sports sponsored by the city. You can visit the city's sports facilities, which include climbing walls, aquatic centers with splash pads, dog parks, tennis parks, and ice rinks. You'll even find horseback riding nearby, clubs that support kite flying, and bowling leagues.

While the Raleigh area doesn't boast any train or subway system like its larger city counterparts, the public bus line is fully functional between the residential areas of Raleigh. The GoRaleigh bus service is headquartered downtown and there is also a cool FREE downtown bus loop (called the RLine) to get around the busy areas of downtown for shopping and sightseeing.

Also, the Raleigh/Durham airport is just a few minutes outside the city making travel for business or pleasure very easy.

According to Forbes magazine in 2014, Raleigh was ranked the 2nd most educated city in the country. Part of that is certainly due to the large technology companies drawing college grads into new jobs, but the great education system in the city of Raleigh can take credit too. Raleigh and the surrounding area is home to more than a dozen colleges and universities including Duke University, The University of North Carolina at Chapel Hill, and NC State.

It is not just the colleges that are great either. Primary and secondary schools in Raleigh are consistently linked by US News and World Report as having high graduation rates and excellent college readiness scores. Parents will have a choice of plenty of charter, private and public schools in the area.

Raleigh and Durham have both been listed in Southern Living Magazines "Tastiest Towns". This tells us that there will be plenty of great eats in the Raleigh area. From the historic Raleigh neighborhood of Five Points (just north of downtown and filled with breweries and hip bistros) to the Warehouse District (characterized by its red brick warehouses which are being renovated into usable space again) there are plenty of options for heading out for a night on the town. The Warehouse District has recently transformed into an eclectic mix of museums, restaurants, and retail space. One place not to miss? Morgan Street Food Hall, similar to a food court but so much more fun.

Raleigh is an excellent city for enjoying the outdoors. There are plenty of natural adventures just minutes from downtown including lakes, hiking trails, parks, playgrounds, gardens and so much more. There are great city parks for families, like Pullen Park which features its own carousel. Or county parks nearby for hiking, boating and fishing. You must check out Lake Crabtree County Park which has over 16 miles of trails with scenic waterfront views. Or Jordan Lake, which is a state recreation park and features sandy beaches for swimming. Speaking of sand, if you tend to be more of a beach-loving person, Wrightsville Beach is the city's closest beach, and it's located only 131 miles east of Raleigh.

If the weather in Raleigh isn't reason enough for you to relocate (all four seasons with a mild winter) perhaps the booming job market, fabulous craft beer scene, and the ability to both snowboard and swim in the ocean just a short drive from home will be enough to convince you. If its southern charm, outdoor beauty, and excellent neighborhoods are speaking to you, don't hesitate to contact College HUNKS Hauling Junk & Moving to help you tackle the details for your move. We can help make the moving process easier for you and your family.