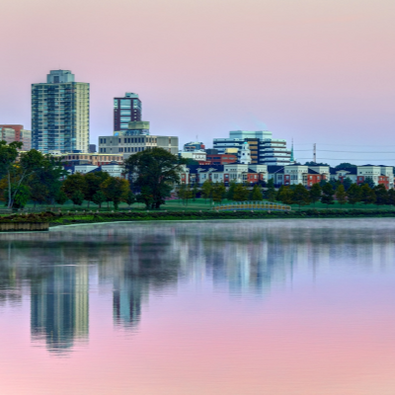 Everything You Need to Know When Moving to the New Brunswick, NJ. Area

If you're looking for a small city with big city amenities, New Brunswick, NJ, is definitely worth a second and third look. Located just southwest of Manhattan, New Brunswick isn't just a bedroom community for the big city, it's a vibrant and thriving city in its own right.

This data is from the US Census Bureau.

This data shows the majority of New Brunswick residents identify as Hispanic, and the city does have the 12th largest Hispanic population in the state. What these numbers don't show is the Hungarian population and cultural influence—in the 1930s, 35% of the population was Hungarian, although that number has dwindled to around 3,200. The Hungarians lived in the Fifth Ward neighborhood near French and Somerset Streets, but today that area is home to the growing Hispanic and Asian communities.

The job market in New Brunswick dropped by 0.1% in 2020, which may well be a result of the pandemic. Although, future job growth is expected to cap at 27.8% in the next rend years, against the national average projection of 33.5%. Any number of factors can change that forecast, which is actually not a bad number. One thing that would make New Jersey in general more attractive to industry is substantial federal and state income tax reform.

Education and health care are the largest employers here.  Pharmaceutical giant Johnson and Johnson and New Jersey flagship University Rutgers are based in the city, and there are several research and teaching hospitals—Robert Wood Johnson University Hospital, Saint Peter's University Hospital, Bristol-Myers Squibb Children's Hospital, and the Cancer Institute of New Jersey. These large and recession-proof industries provide employment opportunities for a broad range of education and skill levels. New Brunswick also has the supporting businesses that these industries demand, from retail to some manufacturing and hospitality.

Rutgers University has the biggest educational footprint in New Brunswick, with over 50,000 students on the main campus and satellite campuses in Camden and Newark. Rutgers is one of the oldest universities in the US, opening its doors in 1766. Rutgers has five campuses scattered throughout New Brunswick, so anywhere you go, you're near the University.

Middlesex College is a two-year college with Associates and certification programs. Many Middlesex graduates go on to a four-year school. One nice feature here is that students can complete bachelor's and master's degree requirements from two other New Jersey colleges.

New Brunswick is about 40 miles from Times Square, so there is transit service to New York and many of the surrounding towns. New Jersey Transit and Amtrak run from two local station, and there are city buses, as well as buses that Rutgers University runs. The commute to Penn Station in Midtown is about an hour.

You can park at metered on-street spots in downtown New Brunswick, and there are parking garages and lots scattered around the central city. Rates are scaled based on the time of day and length of your stay, but meter police do watch for meter feeding.

Several neighborhoods in New Brunswick also require residential parking permits. These are free and designed to ensure on street parking isn't hogged up by commercial vehicles.

The Newark airport is about 20 miles from downtown New Brunswick.

Most people in New Brunswick rent where they live.

New Brunswick is an old city, and the housing here reflects that.  You'll find single family homes in a variety of architectural styles, old and new apartment buildings, and duplexes and triplexes around the Rutgers campus. Most residents live in multifamily apartment buildings.

There are a couple of suburban-feeling neighborhoods, Dewey Heights and Rutgers Village. Home prices here are rising, they are up 13.6% over 2020.

Renting in New Brunswick is more common than other parts of the US, perhaps because of the large student population. Raritan Gardens, near the Rutgers campus, is an incredibly diverse neighborhood, where 3% of residents speak an African language. Only 79% speak English at home. Asians are the most populous group here, but there are also lots of Whites and Africans. Most people here live in large apartment buildings, so when you look at real estate prices here being high, you need to consider that these are for apartment buildings, not single family homes.

Public education in New Brunswick is challenged, probably because of the high percentage of students who do not speak English at home.

The district is 99% minority, and 59% of students are on the free and reduced lunch program. Hispanics make up 56% of the population. There are over 10,000 pupils in the system, spread among nine elementary schools, one middle, and one high school. According to the New York Times, 77% of the student body are considered economically disadvantaged.

There are also several Catholic schools in the city that serve grades K-12.

New Brunswick has a great combination of ethnic and local restaurants. The culinary claim to fame of the city are the legendary "grease trucks"— food trucks that park near the Rutgers campus and cook up "fat sandwiches", concoctions of meat, mozzarella sticks, and marinara sauce that were a hit with students and the locals. The grease trucks had to move on 2013 to make way for a new building, but RU Hungry is still around on Hamilton Avenue, and Fat Darrell's has gone digital.

New Brunswick has live theater, nightclubs, even a comedy club, the Stress Factory.  Mason Gross School of the Arts at Rutgers offers a full calendar of performing arts and galleries that are open to the community. New Brunswick and Middlesex County support three theaters—Crossroads Theatre Company, George Street Playhouse, and the American Repertory Ballet.

The weather here is warm and humid in the summers, and cold in the winters—the average January low is 22. If you like snow you're in luck, New Brunswick gets about 22 inches per year. If you want to ski, the closest resorts are in Pennsylvania.

Things to do in the New Brunswick Area

New York is close enough to see big-time sports, and Rutgers is in the Big 10—plenty of spectator sports at your fingertips. If you like to get out there and play, the city offers league sports for both kids and adults.

New Brunswick has several city parks and public gardens. There are also athletic fields at Memorial Stadium and the Youth Sports Complex. Some of the parks are small neighborhood playgrounds, some are little oases in the center city, and there is one, Buccleuch Park, that features the historic Buccleuch mansion on the grounds, alongside the ball fields and playgrounds.

Pros and Cons of living in New Brunswick

So. Is New Brunswick the right place for you to put down some roots? Here are some of the pros and cons of a move here.

Livability—There are job opportunities, housing, and access to education and transportation, so the city gets points for livability. Rutgers University brings the average age down to 23.6 years old, so it's a younger and more likely transient city.

Diversity—if you want a cultural melting pot, look no further.

Cost of living–Housing and other costs like groceries, health care, and utilities are lower than lots of other urban areas, so if you're on a budget, New Brunswick is a good choice.

Access to health care—There are so many research and teaching hospitals that you'll always have top-notch doctors and cutting-edge health care.

Education—While raw data—student/teacher ratios, graduation rates, enrollment—look positive, the dismal test scores in the district indicate that education is a blot on the city's reputation. With only two charter schools, there aren't many other options than the public schools.

If you're moving here, either as a student or you're working at J&J, the logistics of a move can be overwhelming. Even if you are just moving from North Brunswick or Edison, you still have to actually pack up and go. College HUNKS Hauling Junk & Moving can help you with the moving supplies, packing, and moving. Our professional crews are experts in moving and hauling away old junk, so we take all that worry away from you. Moving—from across the street or across the country—takes a lot of paperwork. Let us manage the move, so you can focus on your new life in New Brunswick.