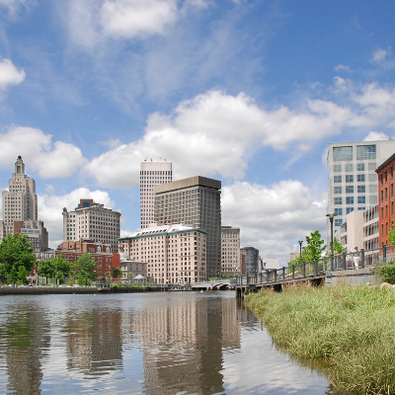 Everything You Need to Know When Moving to or Around Providence, RI

Are you thinking about moving to Providence? You're not alone—in 2020, Providence was ranked one of the 25 best places to live on the East Coast by U.S. News & World Report. The "Creative Capital of Rhode Island" is undergoing a tremendous facelift right now, with a growing job market and an explosion of all types of cultural, industrial, and learning activities.

So yeah, we get it. Moving to Providence might be an excellent decision for you. But you probably have lots of questions, right? What is it like to live in Providence? What kind of jobs can I find? Is there really anything to do in Providence other than dining in exotic restaurants or basking on the beach? Where should I live? The list is endless.

As much as relocating to a different city is an exciting experience, it can also be taxing and stressful. But with this guide, you can wave that stress goodbye. Let us show you around Providence as we answer all of the above questions and more. Shall we?

Providence is the capital and the largest city of Rhode Island. The population of Providence stands at 180,609 but the metro population is 1,624, 578, which includes Fall River and Warwick, MA. There are 9,751 people per square mile in Providence, ranking only behind Central Falls in terms of population density.

The average age in the Creative Capital is 30 years, considerably younger than the U.S. average age of 38 years.

A particularly interesting fact about Providence is that it is home to a thriving, diverse, and dynamic LGBTQ community.

Cost of Living in Providence

Is living in Providence expensive? Well, like most New England cities, Providence does have a high cost of living, but it's not New Haven or Boston expensive. If you shop around hard enough, you'll find a nice and affordable place you can call home.

Given that "Cost of Living" can often turn into an exaggerated theoretical discussion with little or no practical bearing, we are going to give you a quick snap of how much certain purchases would cost in Providence. Here are some stats that we picked from PayScale:

The average home price in Providence is $309,035 (July 2021), and has increased 21% compared to a year ago. Home prices have increased as mortgage rates remain low and demand is high. Over 80% of apartments have an average rent of $1,500 and higher. Rent prices vary by neighborhood.

As you can see from the above breakdown, every item seems to be pretty affordable, except for housing. As such, the Providence cost of living index is 122, which means it's 22% higher than the national average. Providence is the heart and soul of Rhode Island, and like any growing city, housing costs are bound to increase with the population.

Now, if you're really serious about moving to Providence, you should know that the median salary is around $68,000. Bear this figure in mind as you send out applications for jobs in Providence or enter housing negotiations.

This brings us to our next point: The Providence job market.

The job market in Providence, RI, has significantly improved over the past decade and continues on an upward trend. The current unemployment rate in Providence sits at 5.7% (July 2021), which is not far off the national rate of 5.4%.

According to a recent ZipRecruiter report, Providence emerged as the fourth hottest job market in the entire country for 2020, with the fastest growing sectors being education and healthcare. That simply means that if you decide to pack your bags and move to the Creative City of Little Rhody, you will likely land a job within a few days of settling in.

Being home to four Fortune 500 firms (CVS Health, Textron, United Natural Foods, Citizens Financial Group) as well as a host of major hospitals and universities, Providence is well-positioned to offer a wide variety of job opportunities in 2021 and beyond.

According to Career InfoNet, Providence's top employers (based on the number of employers) include, Lifespan Finance, Rhode Island Hospital, Brown University, and Miriam Hospital.

How do you move around Providence? One of the simplest ways to navigate the city is merely by walking. After all, the capital is only 18.5 square miles! You can reach most of your destinations in Providence by foot.

If you don't feel like stretching your legs, then another alternative is driving. Unlike bigger cities like New York or Boston, Providence is incredibly car-friendly. Most homes and apartments have parking lots or driveways, and there's ample street parking and garages around the city. So feel free to bring your car if you do decide to move to Providence.

You can also opt to use the public transportation system. The Rhode Island Public Transit Authority recently expanded its bussing operation to incorporate new stops. So, if you don't feel like walking—and don't want to get around hopping behind the wheel of a vehicle—then the bus line is the best way to do so.

Whether you're commuting early in the morning or late into the night, traffic won't be a bother. The average one-way commute in Providence takes 22.8 minutes, which is slightly lower than the national average of 27 minutes. The only time you're likely to experience commuting hiccups is during winter when RIDOT takes to the city roads to reduce salt usage.

We couldn't possibly forget about the city's only airport, could we? T.F. Green Airport, is conveniently perched six miles south of the city.

Art, Culture, and Nightlife in Providence

Providence is often considered an unsung mecca for art and culture. Aside from being home to the popular Rhode Island School of Design, Providence draws all types of creators with the promise of affordable live/work studios, gallery nights, and numerous music, theatre, and music avenues.

When it comes to nightlife, Providence doesn't disappoint either. There's a wide array of joints and nightclubs where you can party, sing your heart out at karaoke, break out some dance moves, show off your trivia smarts, or simply tuck away in the corner as you gobble down a cold beer. If you do decide to move to Providence, you'll find comfort in several high-end clubs, including The Avery, The Hot Club, The Parlour, and many more.

One thing you'll realize when you move to Providence is that you'll be 15-20 minutes from everything. Even the three best public parks—India Point Park, Waterplace Park, and Prospect Terrace Park—are only a stone's throw away. The best part? All parks are open and easily accessible by car, bus, or foot.

Needless to say, education is the heartbeat of Providence. So, it's not a surprise to bump into a public library every few meters. While most libraries close their doors at 1 PM., some extend up to 5:30 PM. All of them are easily accessible by road. The leading public libraries in Providence include Providence Public Library and Providence Community Library: Rochambeau Library.

There are a huge number of Providence museums which are within a short walk of the city center (or five to ten-minute drive). From the charming Providence Children's Museum to the iconic John Brown House Museum, you'll never run out of museums to visit if you do make that jump to the capital of Little Rhody.

If you're still asking, "Should I move to Providence?", perhaps  the wide variety of outdoor activities in Providence might just get you over the line.

With impressive and pristine state parks, awe-inspiring parks and trails, and well-tended farms—not to mention the majestic Atlantic Ocean in the backyard—Providence makes for quite the playground.

Locals enjoy biking, ice skating, strolling, gardening, and golfing, but that doesn't mean you can't break away from the norm. Hiking on the grounds of the Neutaconkanut Hill Conservancy, sightseeing in the expansive Francis C. Carter Memorial Preserve, or jogging inside the mercurial Blackstone Park are activities that are certainly worth a try.

Neighborhood Information: Where to Live in Providence?

Blackstone and Hope: Luxurious…but the price is not ideal for everyone.

If you don't have an established family or are not a professional, then the Blackstone and Hope neighborhoods are likely not for you. The biggest selling point for these neighborhoods is their safety, convenience, walkability, distinctive architecture, and beautiful landscaping.

DownCity: For the city enthusiasts

If you love the hustle and bustle of city life, and want to be a hop, skip, and jump away from the best shops, venues, and restaurants Providence has to offer, then you can't wrong with DownCity (otherwise known as Downtown).

1.4 miles south of DownCity lies one of the most affordable neighborhoods in Providence: Federal Hill. Here the food is as delectable as it is diverse. Commonly known as Rhode Island's "Little Italy," Federal Hill has an array of award-winning Italian eateries to match. And because of its inexpensive rent, it is a popular location for college-going individuals attending school in the capital.

Another worthwhile Providence neighborhood is Fox Point, especially due to its rich history and close proximity to Downtown. Coffee shops. Art studios. Quirky restaurants. You'll find all these spots in Fox Point, which is why it is such a popular hangout for hipsters and students.

Wayland's huge array of shops, parks, coffee shops, bars, and restaurants makes it such a desirable neighborhood for families.

Pros and Cons of Moving to Providence

Up until this point, we've largely looked at the pros of moving to Providence. But just like any other city in the world, life in Providence isn't all smooth-sailing. If you're still asking, "What is it like to live in Providence" let's help answer that question as genuinely as possible.

As far as relocating to the little state of Rhode Island goes, Providence has a lot to offer. All the best as you prepare to open a new chapter of your life!

Want to read additional guides on how to move across town or across the country? Feel free to visit our College HUNKS Moving Resources page. It's got helpful recommendations, up-to-date moving tips, and anything else you might need to get your new adventure to a great start.

And when you're ready to say hello to Providence, College HUNKS Hauling Junk & Moving is here to help. Our professionals will make your move to Providence stress-free for you and your family. From packing to unpacking, junk removal, and moving, we've got you covered!