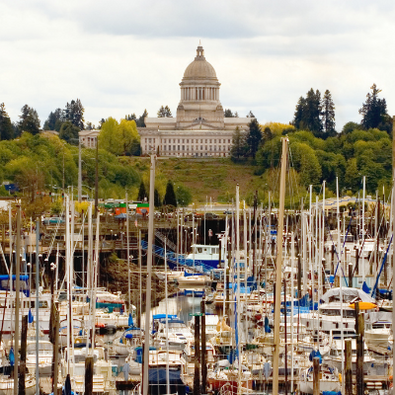 Everything You Need to Know When Moving to Olympia, WA.

Read on to discover everything important to help guide your relocation decision.

A Brief History of Olympia

The city of Olympia is located on the Budd Inlet next to Capital Lake at the southern tip of Puget Sound and the mouth of the Deschutes River, about 30 miles southwest of Tacoma. The land on which the city is built, and the surrounding areas, were historically inhabited by Lushootseed-speaking Native Americans before it was charted and settled on by famous English explorers as early as the 1840s.

In 1851, the U.S. Congress established the Customs District of Puget Sound, and shortly later, Olympia was made the official entry port for all ships. In the following year, the town of Olympia was officially born, and it became the county seat of the newly formulated Thurston County, and it remains so to this day.

According to the U.S. Census Bureau, the population of Olympia in 2019 was 52,882. The city is comparatively small, sitting on 17.82 square miles of land, making it the 24th largest city in Washington. This translates to a population density of 2,968 people per square mile. The city has a lot of potential to prosper, as its population grew by a whopping 15.4% between 2010 and 2019 according to the World Population Review.

Here is the racial makeup of the Olympian population:

The cost of living in Olympia is just 6% higher than the U.S. average in 2021, according to statistics published by bestplaces.net. The median monthly after-tax salary of a working Olympian is $3,219. Interestingly, according to livingcost.org, you would need about $1,890 per month to cover the living expenses of a single person in the city.

The average cost of a studio apartment in Olympia is $982, while one-bedroom costs about $1,021, according to bestplaces.net. A two-bedroom apartment costs an average of $1,207, and a three-bedroom will set you back about $1,715 in rent every month. If you plan on buying a home when you move, you should know that the median value of owner-occupied houses in the city in 2019 was $297,200 according to the U.S. Census Bureau, significantly higher than the national average of $217,500.

Numbeo estimates that it costs about $933.56 for a single person to live in Olympia for a month, exclusive of rent. It costs about $3,312.85 to cater to the living costs of a family of four, excluding rent.

Being a city in the national capitol state, Olympia boasts of a highly educated population. According to the U.S. Census Bureau, about 92.8% of the residents aged 25 years and older in the city graduated high school, while 43.6% hold a bachelor's degree or higher.

However, figures published by the Bureau of Labor Statistics reveal that the unemployment rate in the city stood at 6.1% in July 2021. This was slightly higher than the national unemployment rate of 5.4% in the same period.

The top industries that drive the city's economy are agriculture (including livestock and poultry), industrial manufacture and supplies, timber and wood products, processed foods, industrial supplies, plastics, and machinery. Thanks to the city's location in Washington, tourism, and agriculture are strong elements of Olympia's economy.

Here are the largest employers in Olympia according to citytowninfo.com:

One of the things Olympia is most admired for is its natural landscape beauty, including green parks and highly walkable city streets. The city has 32 miles of bike lanes, over 10 miles of trails, countless neighborhood walking paths, and a fare-free bus transit system.

Biking and the Intercity bus system are the most popular ways to get around within Olympia city. However, about 73% of the city's working populace prefer to drive to work. Parking is available, timed and metered on the street. The leased street lots are owned by the city. Private parking is also available in downtown Olympia for daily and leased long-term parking. Because of this, the average commute time in the city is 20.5 minutes, according to bestplaces.net. Note, however, that this is impressively lower than the average national commute time of 26.4 minutes.

The Thurston Regional Planning Council has made great investments in Olympia's public transportation systems and roads. As a result, the roads are in good condition county-wide, and there is little congestion and abundant parking within the city.

You can use multiple other reliable transportation modes in Olympia the public can use, including RideShare, Greyhound bus, Olympia-Lacey Amtrak train, and the BoltBus, currently temporarily operated by Greyhound. The Seattle-Tacoma Airport provides daily national and international flights in and out of Olympia. Private taxis, which cost between $50 to $200, are also quite popular in the city.

If you wish to experience the culture of Oly, be sure to attend the annual Olympia Harbor Days festival and enjoy local live entertainment, art and crafts, food, and tug boat racing. The family-friendly festival lasts an entire weekend and is often held at the Percival Landing.

Olympia is diverse in many ways, but most notably in the food and fun, you can try within the city. The restaurant and dining scene is rich, and you can be sure to find the food and drink you already love, as well as try something new that will delight your taste buds. There are hundreds of restaurants and dining spots you will discover with time, but the most notable places you should check out when you land in the city for the first time are:

Olympia comes alive when the sun sets. Some of the top bars and clubs where the residents flock to vibe are:

Seasonal Weather and Things To Do Outdoors

Olympia is located in the Pacific Northwest. The climate of the area is best classified as warm and temperate, according to WeatherSpark. It is characterized by short, warm, dry summers and cold, wet, and overcast winters. Over the course of the year, temperatures vary between highs of 80°F and lows of 34°F. The temperatures are, however, rarely ever higher than 91°F or lower than 23°F.

The best time to spend outdoors and enjoy the Olympian weather is between mid-July and late August when it is mostly partly cloudy, and temperatures are warm. Some of the top activities Olympians enjoy during these and other times include:

Olympia has many parks and natural attractions that can be fun to visit and have fun with the family. There are also many hidden local treasures that the average tourist may not discover easily. These include local flower farms, craft beer breweries, coffee trails, and wineries. You will not be short on things to do regardless of the weather when you move to Olympia.

Best Neighborhoods to Move to in Olympia

As you plan to relocate to Olympia, you should know that the city has over 20 neighborhoods. The quality of life and the general 'feel' of living varies by neighborhood. Here are the most notable neighborhoods you should find out more about as you explore and compare to find one that best offers the kind of lifestyle you wish for.

This is a well-established neighborhood just a few blocks from the state capitol building. The neighborhood is home to many great amenities, including two turf ball fields, picnic parks, and the Stevens Field tennis and basketball court. In addition, the neighborhood is within proximity of Lincoln Options Elementary, the oldest school in Olympia.

As the name hints, this neighborhood is located to the east of downtown Olympia. It is primarily a residential area, but it has many commercial establishments. Most homes in this neighborhood date back to the late 19th century.

This new and upcoming neighborhood attracts young professionals and people looking for a neighborhood with a modern American outlook. The neighborhood is close to Watershed and McGrath Woods parks and is within walking distance of the central business district. Washington Middle School is within the Cain Road Neighborhood.

Providing an exquisite view of the Budd Inlet's East Bay, this narrow neighborhood is one of the most sought-after by the Olympian elite. The neighborhood has an active association that has won the hearts of many for its effort to clean up the inlet and maintain the neighborhood's nature by planting oysters every year.

Most renters moving to Olympia for work often start looking for a place to live in the Northwest neighborhood because it borders downtown and capitol Olympia. Most homes in the neighborhood were built right after World War II and are thus modern and spacious. This neighborhood is close to the Woodruff and Garfield Nature Trail parks.

Nottingham is a small but affluent community of about 200 homes. It is also home to Olympia High School, Sunrise Beach School, and Pioneer Elementary. The neighborhood is located to the southeast of the city and is well known for its beautiful residences and English street names, including Norfolk Court, Victoria Court, and Buckingham Drive.

Here are a few more of the most notable neighborhoods in Olympia you should find out more about.

Pros and Cons of Moving to Olympia

Good Reasons to Move to Olympia

Reasons to Reconsider Moving to Olympia

We Can Help You Move to Olympia

Olympia offers its residents the feel of a big city but without the congestion and hassle. Being a city in Washington state, the amenities are well developed, the working populace is diverse, and there is a good number of 'out-of-towners' at any time of the year. Olympia is a cultural hub and a popular destination for people en-route to the Ocean cities and beaches to the west. As you plan on moving, it pays to factor in the upsides and downsides that its location brings.

It will take good planning and possibly assistance from a professional to make your move smooth and affordable. When you are ready to move, or wish to find out more about the city, be sure to Contact College HUNKS Hauling Junk & Moving for professional moving advice from the movers who know the city well