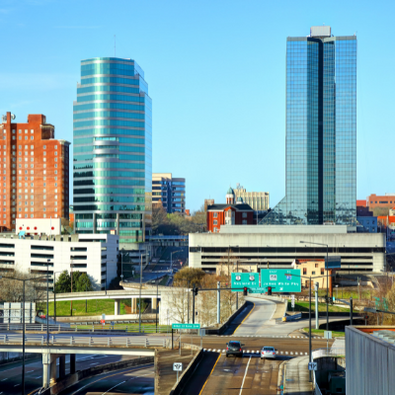 Anybody with a TV knows Knoxville, Tennessee, but there's a lot more to the city than football Saturdays, big orange checkered overalls and lots of great live music. Knoxville is the largest city in East Tennessee, and although it's smaller than Nashville or Memphis, it packs just as much influence as its bigger siblings.

Knoxville is where the French Broad and Holston Rivers merge to form the Tennessee River. It's nestled in a valley between the Great Smoky Mountains to the east, and the Cumberland Mountains to the north. This topography, combined with a mild climate, make Knoxville a paradise for people who love the outdoors.

Overall, it is a great place to live—the economy is growing, housing and health care costs are below the national average, and the University of Tennessee flagship campus in downtown Knoxville ensures a wide variety of cultural and entertainment opportunities.

Knoxville by the numbers

Here are some key statistics about Knoxville, courtesy of the US Census Bureau.

In June, there were 415,339 employed people in the Knoxville metropolitan statistical area, about 3,600 fewer than February 2020, according to the Bureau of Labor Statistics

The year over year average for home prices is trending way up—14.6%. Homes are selling for a whopping 5.42% over list price, although as of August 2021, the market is currently considered to favor buyers, per Realtor.com.

I-40 cuts through the middle of downtown Knoxville—you know you're there when you see the big gold Sunsphere dome that's a reminder of the 1982 World's Fair in the city—so the average commute time for the labor force is only about 20 minutes.

The city more or less sits in a bowl, so the weather is fairly temperate year-round. Summers are hot and muggy, and some years the heat and humidity bleed into spring and fall. This does make for a short winter, although the January temps are the lowest—averaging 28.9° with some snow and rain. There are only about six inches of snow every year, but 50 inches of rain. It just doesn't have the sustained cold for much snow, but the great weather from March to October is a huge boon for outdoorsy types.

Knoxville is recovering nicely from the pandemic. Economists say that employment is back to pre-pandemic levels, and new businesses continue to come into the city. The most recent is India-based IGT Technologies, which has opened an operations center and is planning to invest $3.9 million in the expansion and create over 200 jobs.

The largest employers in Knoxville are government-related, which means the city is somewhat immune from economic cycles. Oak Ridge National Laboratory—where the US Department of Energy developed nuclear projects, including the Manhattan Project in the 1940s—is still in the nuclear business. They employ almost 12,000 workers.

The University of Tennessee is another large employer, with a labor force of almost 9,000.

Here are the other major employers in Knoxville. As you can see, there is a broad range of industry and education levels.

If you're a big fan of sophisticated public transportation, Knoxville will probably disappoint. There is local bus service within the city limits, with 23 fixed routes that operate every day of the week, but the central bus station customer service center is only open during business hours, Monday through Friday.

Three trolleys serve the downtown area, and of course it's the Orange line that stops at the UT campus. The trolleys are free.

Knoxville's airport is served by major US airlines Delta, United, and American, as well as smaller carriers Allegiant and Frontier. It's not a huge hub airport; most flights do connect in Charlotte, Atlanta, or Chicago. You can fly non-stop to Washington, DC, Boston, New York, and several resort areas in Florida on a seasonal basis.

Although some sources rate the Knoxville area public schools as good or better, the reality is that they are barely exceeding national averages, which are somewhat dismal. They are, however, outperforming the rest of the state.

Proficiency in reading and math

At the end of the day, Knoxville comes alive, It is a college town, and has the vibrant restaurant and bar scene you'd expect in a place with 28,000 college students. That said, it's not all bar food and beer. There's a strong emphasis on locally sourced food, and foodies find Knoxville full of culinary delights. The Food Network has several Knoxville faves, from Sweet P's Barbecue and Soul House on the Maryville Turnpike to the Sanctuary Vegan Cafe.

East Tennessee has outdoor activities galore. From the Urban Wilderness adventure park to the real wilderness of the Smokies, there really is something for everybody. Even if you're a totally city creature, you can get your daily steps in if you just walk up the 93 to Ayres Hall, the landmark building on the University campus.

The Park is the most visited in the US park system, but when you live in Knoxville you can hike, camp, fish, and just go outdoors year round. The best-kept secret of the Park are the synchronous fireflies—for a couple of weeks every summer, the mating fireflies put on a light show that puts Fourth of July fireworks to shame. Although they're famous in the park, you can see fireflies in the greater Knoxville region.

Knoxville has several museums—the Knoxville Museum of Art and the McClung Museum of Natural History and Culture are the biggest, but there are lots of smaller galleries and exhibits in local historical sites.

Although the Volunteer Navy isn't highbrow culture in most of the world, in Knoxville it's a grand tradition. Since 1962, Volunteer football fans cruise up the Tennessee River on fall Saturdays and tailgate on the river, right by Neyland stadium. Street parking is at a premium, you know.

Where to live in Knoxville

One of the benefits of Knoxville is the broad range of neighborhoods at every price point. Sequoyah Hills is the elegant Grande dame of the city, where the average list price is $699,000. Old North Knoxville is a more palatable $245,000, while the hip downtown area lists for a hefty $404,000.  If you're relocating, your realtor can point you in the right direction for your budget and lifestyle.

Pros and cons of living here

Pros of living in Knoxville

If you're thinking of a move to Knoxville, as the locals call it, there are a lot of reasons why it's a good idea. Everything is cheaper here, from housing to groceries to transportation. The weather is great, and you can always find things to do, even if you don't bleed orange. UT is one of the best public universities in the country, with exceptional law and architectural schools. Traffic is not a problem, you can get just about anywhere in less than 30  minutes.

The schools are pretty good, and aside from UT, there are other four-year colleges here and community colleges in the area.

Low taxes are another great reason to move here. Tennessee assesses residential property taxes at the low, low rate of 25% of appraised value, and commercial property at 40%. This is clearly a great place to open a business! The sales tax is a little high, at 7%, but state income taxes? There aren't any, as of 2021.

Cons of living in Knoxville

One thing to be really up front about here—Tennessee is a really conservative state, The politics of Knoxville tend to be a bit more progressive, especially in the city proper. With that out of the way, there are a few more cons to Knoxville—like the soggy, muggy summers and blinkand-you-miss-it winters. Also, a car is a must if you live here, unless you live in the center city and have everything delivered, and you want to be on a first-name basis with all the Uber drivers. And if you're not a UT fan, you might consider your neighbors extremely obnoxious come fall.

Moving shouldn't be a hassle

If you're worried about a move because you've never done it before, let College HUNKS take away the stress and worry. Even if you have moved a lot and are retiring to Knoxville—lots of people do—we can provide any moving services you need, from counting out boxes to loading and driving the trucks to taking your unwanted stuff away. There is so much to do when you move—even if it's just across town you need a new driver's license and voter registration—that letting our professional team of packers and movers help gives you the time to manage the details of your move.