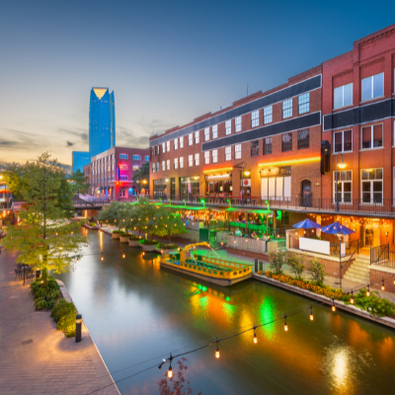 Are you thinking of living in Oklahoma City (OKC)? If yes, there's plenty to learn and discover about the City of Oklahoma. The city serves as the state capital and is the largest in Oklahoma.

Oklahoma City is an ethically, culturally, and industrially diverse place. It is centrally placed in the state and connected to several highways. There are numerous businesses and homes in the city. You can also find retail centers, schools, parks, museums, theatres, and the city government to meet your needs.

Whether you're planning to move to Oklahoma City or researching where to live in Oklahoma City, this moving guide has all you need to know.

Why Move to Oklahoma City?

Why move to Oklahoma City? The first reason is the low population. According to the United States Census Bureau, 655,057 people were living in OKC in 2019. The city's population has risen over the years. There was a 12.9% increase in population from 2010.

Household Income and Cost of Living

In 2019, the median household income in Oklahoma City was $55,557, which is below the U.S national median of $65,712. While the cost of living varies among households, it's relatively low compared to other states. According to Payscale, the cost of living in OKC is 15% lower than the national average.

Of the residents that are 25 and over, 86.4% are high school graduates, while 30.7% have bachelor's degrees and higher education. There are several higher learning institutions in the city, including Oklahoma City University and Oklahoma State University.

While Oklahoma City has a long history with agriculture and petroleum products, it is economically diverse. Here, you will find companies and businesses in energy, health, transport and logistics, finance and insurance, the service industry, and retail.

Oklahoma City is home to a variety of employers:

The majority of the people in Oklahoma City move around in private vehicles. The mean travel time to work is 21.4 minutes, which means you don't have to worry about traffic. According to BestPlaces, 82.3% of people drive their vehicles to work, and 11.2% carpool. Only 0.6% of people in Oklahoma City take mass transit to work. The city government provides public transportation such as fixed bus routes, streetcars, paratransit services, bike rentals, and river ferrying.

According to TripAdvisor, Mob Grill is an excellent restaurant for American burgers, drinks, and classic American meals. Hideaway Pizza has amazing Italian pizza, potato chips, and Mac and cheese. You can never go wrong with excellent Brazilian steak at Texas de Brazil. For Asian cuisine and vegetarian options, you can try the Szechuan Bistro. For a fine dining experience, book a table at Metro Wine Bar & Bistro, Red Prime Steak, and Vast.

Oklahoma City has plenty to offer in terms of history, arts, and culture. Historical centers such as the Oklahoma City Memorial and Museum, the National Cowboy & Western Heritage Museum, Science Museum Oklahoma, and Oklahoma City Museum of Art are great points to explore. There are also several libraries available to the public in the city. Some of the best libraries are the Downtown Library, Belle Isle Library, and Southern Oaks Library.

OKC also has beautiful public spaces where you can enjoy the 235 days of sunshine. There are interconnected trails throughout the city, gardens, small lakes for paddling and canoeing, playgrounds, dog parks, and plenty of nature and wildlife.

Summers in OKC are hot, with temperatures 90 degrees Fahrenheit. The hottest months are June, July, and August. Overall, Oklahoma has an average of 235 days of sunshine. The national average is 205 days which means you can look forward to plenty of swimming and light clothing.

The average precipitation in the city is 36 inches annually. May, June, September, and October are generally wetter than other months. January is the coldest month of the year, and temperatures drop to 27 degrees Fahrenheit. Winters rarely go into a deep freeze and are relatively manageable as long as you keep warm. The snow is also low, around 5.8 inches compared to the average 27.8 inches nationally.

The most pleasant months in Oklahoma are those with temperatures between 70 and 85 degrees Fahrenheit. These months are May, September, and October.

Where To Live in Oklahoma City

The state of Oklahoma is ranked #4 in terms of the cheapest housing market in the United States.

The average rent in Oklahoma City is $845 per month (as of June 2021) for an apartment size of about 850 square feet. While the rents in OKC have been increasing, they are still significantly lower than the U.S average of $1,482 per month. Home values in Oklahoma City are averaging $169,592 as of June 2021. Home prices have risen 14% in OKC since last year, however they remain far more affordable than a good portion of the county; the median housing price for the United States is $386,888 (as of June 2021).

According to Niche, some of the best areas for families to live are:

These are suburbs within the Oklahoma City area with access to good schools, parks, security, and quiet lives. These suburbs are also great for young professionals.

Other popular neighborhoods in OKC and part of the Oklahoma City metropolitan area include:

How to Move to Oklahoma City

If you've decided to relocate to Oklahoma City, it's important to plan your move thoroughly. Hiring professional movers is the best way to move within the city, between cities, and interstate.

Once you get settled in from your move, you'll need to update these essentials:

Pros and Cons of Living in Oklahoma City

What is it like to live in Oklahoma City, and why should you move there? The low population and cost of living are some of the best reasons to move to Oklahoma City. You can also own a home for less than half of the national median value. Since there are fewer people commuting, there is basically no rush hour.

However, the monotonous rolling arid landscapes of Oklahoma can get boring. If you desire adventurous landscapes and thrilling nightlife, Oklahoma City may not be for you. Oklahoma City is also prone to extreme weather. Drought, flash floods, and tornadoes occur throughout the state and should be taken seriously.

Are You Ready to Move to Oklahoma City?

Are you ready to move to Oklahoma City? College HUNKS Hauling Junk & Moving can help you with all your moving and junk removal needs. Our friendly and professional HUNKS will keep your relocation to or around Oklahoma City stress-free. Call us at 833-626-1326 or get a free estimate for our available services.