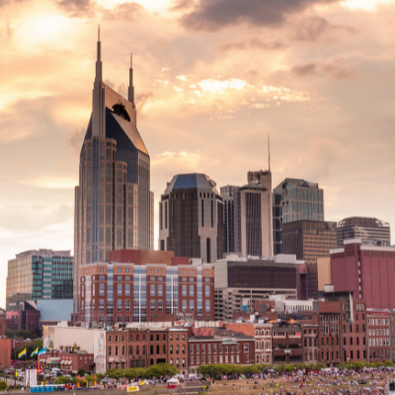 Everything You Need to Know When Moving to or Around Nashville, TN

If you're relocating to "Music City", you are in for a treat. Nashville, Tennessee is home to a lively music scene, some great professional sports, and outdoor spaces for miles. Even if country music isn't your jam, you'll be pleased to note that Nashville has a lot to offer including a bustling job market and Tennessee's famous slow-cooked barbecue. It might just be the relocation opportunity you've been looking for.

What makes Nashville a great place to live?

Even though  US News and World Report lists Nashville as the #1 place to live in Tennessee, but making a big move always involves a lot of important questions. It can be stressful if you don't have a plan in place. You'll want to know exactly what living in Nashville will be like before you make your move. What area attractions are the most popular? What is the restaurant scene like in Nashville, TN? What do people do for fun around the city? What up-and-coming neighborhoods are in Nashville?

Nashville, Tennessee is a city of neighborhoods. Much like Manhattan, Nashville locals define themselves by the neighborhoods they live in. As a new resident your experience in the city will be different based on what area you choose to call home.

East Nashville is where you want to be to absorb great cultural events and find the best local restaurants. It's on the east side of Cumberland River, and has small-town feel while encompassing several smaller Nashville neighborhoods. In East Nashville you'll find quaint coffee shops and hip co-working spaces as well as local boutiques and the famous Edley'sBBQ.

Known for being one of the most historical parts of town, this area is also great for foodies and is a fabulous neighborhood for walking. It has loads of old-world architecture, but lots of modern twists and is close to downtown.  You'll find plenty of greenspace in Bicentennial Capitol Mall State Park nearby.

The Gulch with its proximity to downtown is where you want to be for live music and nightlife. Right in the heart of Nashville, The Gulch is a great neighborhood for urban living. Restaurants and entertainment adorn each corner with high rise apartments and lofts the standard residential buildings.

This area is the best in Nashville for shopping and people watching. It's adjacent to Vanderbilt University so the area tends to attract a mix of young professionals and current students for a lively vibe. Its easy to walk to restaurants and pubs which will be playing live music every night of the week. Upscale apartment living is a typical residential choice in this area.

Nashville's residents come in on the census as slightly younger than the state average which might be due to the number of universities in the area whose graduates stay after graduation. But, we promise, Nashville is more than just a college town. Its suburban areas are filled with families who reside in quaint communities like Mt. Juliet and Hendersonville and young professionals who flock to the downtown areas. The current metro area population of Nashville in 2021 comes in at around 1,272,000.

According to census reports, the racial composition of Nashville is:

Job Market and Cost of Living in Nashville

While it may be true that if you dream of superstardom à la Taylor Swift, Nashville is just the ticket, there are lots of other excellent job markets hiring in the Nashville area.

Technology and health care are the two top employers in Music City. Vanderbilt University Medical Center employs thousands of residents and there are a few smaller health care startups in Nashville which have been propelled in their growth because of healthcare technology companies. Tech companies like, Healthbox Technologies, have helped to increase the growth of the healthcare industry exponentially. Nashville has become a hub for startup tech companies and offers opportunities for people looking to begin a career in the technology field.

Nashville is also a great place for young people to grow their careers or for professionals who welcome a career change. Young professionals are drawn to the city because the starting salary in the area nears $50,000. Big industries in the area include companies like Bridgestone Tires and Vanguard Industries which both have their headquarters in Nashville.

Nashville is affordable when you compare it to other major US cities. The housing market can be fierce competition here though. Since Tennessee is one state that doesn't have income tax, population has been steadily increasing, thus a rise in home value.

Sports fans can rejoice over their choices in Nashville. Music City is home to the Nashville Predators; the NHL team plays right downtown at Bridgestone Arena.  But, if NFL is where your fandom lies, the Tennessee Titans play in their stadium which sits right along the Cumberland River, near downtown.

Nashville has outdoor spaces to brag about. The Cumberland River divides the east side of Nashville and provides a gorgeous walkway along the river for biking or strolling. There are county and city parks to explore with a great system of greenway trails and playgrounds including a vibrant parks and rec program.

Centennial Park is a prominent feature in the city. It's home to a replica of The Parthenon, one of Nashville's most famous monuments. The Parthenon is a really cool sight all by itself, there's an art museum there and a full-size recreation of the Athena statue. Aside from that, the park has a little lake and a great summer lineup of events like free concerts and Frisbee competitions.

The Nashville Parks and Rec program sponsors the Outdoor Nashville Facebook page, which will keep you up to date on local outdoor activities.

Residents of Nashville can enjoy all the city's sports facilities which include state-of-the-art aquatic centers, tons of dog parks, tennis parks, ice rinks, and expansive park systems. You'll also be able to find opportunities for fishing, kayaking, or camping nearby.

Some favorites of residents include nearby Radnor Lake State Park. This park is over 1,300 acres and has 6+ miles of trails for hiking. There are guided canoe excursions and opportunities for ranger-led bird watching.

Nashville is a quickly growing city and public transportation seems to still be a little lacking. There is a public bus system, but it seems most residents choose to drive their own cars since the city is so sprawling. They have started to implement the use of their new light rail system with plans to build it out further to accommodate more neighborhoods, but the timeline of that project is still TBD. That said, rush hour can be a nightmare in Nashville, and you'll have to allow extra time to get where you're headed during busy commuting hours.

Downtown Nashville might be touristy, but if you're a newcomer to the city it's something that cannot be missed. This is where you'll find all those famous honky-tonks between Broadway and 2nd Avenue.  Live music is drifting out the doors of clubs and bars every day of the week here and regular events will be going on at Bridgestone Arena, Nissan Stadium, the Ryman Auditorium, and along the Riverfront. It's a great place to spend an afternoon.

Nashville's famous for its whiskey and bourbon, and you'll be able to find distillery tours at several local distilleries.  You can start with a big name, like Jack Daniel's, and continue on to find some local and craft distilleries as well.

Just outside of downtown in an unassuming strip mall you'll find the iconic Bluebird Café where you can hear songwriters perform their original pieces and occasionally stumble upon a famous name making an appearance (Taylor Swift and Garth Brooks both got their starts at The Bluebird Café). Seating is limited and tickets sell out quickly.

If you've not heard of hot chicken, you'll need to go straight to Prince's when you arrive in Nashville.  Hot chicken is a type of fried chicken that's covered in a special hot sauce which originated in Nashville.

There's a lot of debate where you can find the best BBQ in Nashville but if you're looking for a fan favorite, head to Martin's Bar-B-Que Joint.  Their downtown location has a pretty, outdoor beer garden to sit in while you enjoy your barbecue. Yelp also lists Edley's BBQ as one that shouldn't be missed.

Considering a move to Nashville?

If you're ready to move to the south y'all, Nashville might have exactly the southern charm you're looking for. Its quirky and diverse neighborhoods and never-ending options for a night on the town continue to draw people ready to relocate to Nashville.

If you're looking for some guidance in organizing the details of your move please give College HUNKS Hauling Junk & Moving a call today. We have lots of options to help make the moving process easier for you and your family.