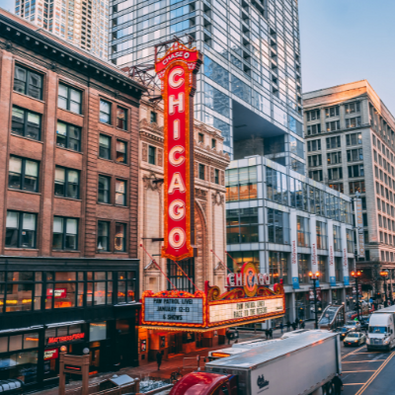 Chicago, Illinois is one of the most visited cities in the United States, and not just because travelers have long layovers at Chicago's O'Hare airport. The city is full of rich historical culture, excellent dining and shopping, and access to beautiful Lake Michigan beaches. Chicago truly has a lot to offer those who choose to relocate to the Windy City.

According to the most recent census reports, the racial composition of Chicago is:

Job Market and Cost of Living

There are lots of big businesses that make Chicago their home, and many different types of industries make the Windy City their home base. These include several big names in the finance and business sectors. JPMorgan Chase, Deloitte, Boeing, and United Airlines all have their headquarters in Chicago. Many residents also work for major corporations with facilities based just outside the Chicago metro area, including Nestle and Ford.

In addition to all the industries in Chicago, it is also a major transportation hub with various railroads intersecting here on their way across the country.

If you're coming from a smaller town you may be surprised by prices when looking at apartments in the center of downtown. US News and World Report shares that "the average rent in Chicago is $1,943, and the average apartment in Chicago is 749 square feet as of February [2021] according to rental listing information site RentCafe.com."

The cost of living in Chicago is all over the board and depends heavily on what neighborhood you're looking at. In some northern Chicago neighborhoods (like Lake View or Lincoln Park) you will see homes that are selling for more than $1 million. Alternately, homes in other parts of the city sell, on average, closer to $332,565 according to US News and World Report.

Chicago Neighborhoods To Check Out

Known for its walkability and proximity to beautiful lakefront trails, this neighborhood is only a 30 minute commute to downtown and has lots of nearby L stations. It's also close to Wrigley Field and offers a nice mix of urban and suburban features.

As one of the safest areas of the city with an exceptionally low crime rates, it's obviously one of the most sought after places to live. Lincoln Park is packed with hip boutique shopping areas and locally owned restaurants. Close by are the Lincoln Park Zoo and the Chicago History Museum, the area is predominately made up of young professionals, recent college graduates and young families. However, it remains one of the most expensive places to live in the city.

With a median home value at about half that of homes in Lincoln Park, Wicker Park is a popular place to live. It's located in Central/Northwest Chicago, and is typically known as just part of the West Town area. You'll find lots of bars, coffee shops, and restaurants in the area. Wicker Park is also known for its collection of interesting niche shops and thrift stores.

Chicago loves its sports teams. If you don't already root for one of their many professional teams it might be a good idea to choose which team you'll be cheering on, as you are planning your move. Chicago's residents cheer for professional baseball teams based on which side of town they live on. Be sure to know that north side residents are Cubs fans while south side residents root for the White Sox. Don't be sad if baseball isn't your sport of choice; football, hockey, and basketball fans have their choice of the Bears (NFL), Blackhawks (NHL), and Bulls (NBA) to cheer on.

While Navy Pier might be a bit of a tourist destination, its waterfront programming and events keep it high on the list of Chicago's top entertainment destinations. Locals will schedule kayak tours of the area to go hand-in-hand with the Navy Pier's fireworks schedule in order to view the famous display from the water.

Located on Navy Pier, The Chicago Shakespeare Theater produces as many as 19 plays and 650 performances a year on various theater spaces owned by CST. They'll also perform in area parks and participate in local high school arts programs to further the education of Chicago's youth. It's a must-see experience if you're thinking about a night out on the town.

Garfield Park Conservatory is an indoor gem where locals go to get out of the harsh Chicago winter weather. Inside you'll find thousands of plant species and a lot of activities and experiences (which are often free) including yoga classes, a monthly lecture series, and a bi-monthly concert series for kids. Also, admission is free. It's a win-win.

Public transportation in Chicago is plentiful. It's the second-largest public transit system in the US and while Chicago is a very walkable city, when your feet get tired you'll have lots of options. It is very easy to get around, even when you don't own a car in Chicago. The famous "L" line runs several routes 24 hours a day and can take passengers from the center of the city all the way to the outskirts, including a route to O'Hare airport. It's called the "L" because large parts of the system run on an elevated track, but don't be surprised when some of it looks just like a regular train track or subway system.

The city also offers bike-sharing and even a water-taxi system.

More than 200 of Chicago's high schools have been recognized on US News & World Report's Best High Schools rankings. Parents who are sending their children to school in Chicago have a large list of options regarding public, private, or charter schools with over 1,100 private schools in the area. Chicago is rich with advanced education opportunities as well, the area is home to 54 colleges and universities including the University of Chicago, DePaul University, The University of Illinois, and Loyola University.

Home of an excellent Chicago dog and fun ambiance, they serve burgers, dogs, and fries with a side of insults. It's more than just a hot dog stand, it is dinner and a show with insults thrown between staff and customers which range from playful to downright mean. Still, it is an experience that shouldn't be missed.

Lou Malnati's is the base standard for Chicago deep dish pizza. You'll be hard-pressed to find someone who doesn't agree that the chain, with 50 local storefronts, makes the best deep dish. Their crust remains crisp on the bottom despite so many toppings, you'll need a fork and knife to consume your slice. You can even order a pie frozen and delivered to your door kept on dry ice.

13 blocks of North Michigan Avenue comprise what is widely known as The Magnificent Mile. It is lined with retail stores, a long list of great restaurants with any cuisine you're craving, and examples of Chicago's gorgeous historical buildings.

Chicago offers 18.5 miles of sandy beachfront along Lake Michigan and a lineup of fun beach activities.

North Avenue Beach is very walkable from the Lincoln Park neighborhood and has the best views of the Chicago skyline. The 31st Street Beach can be enjoyed free of charge and almost always has free live music on weekends. Montrose Beach is well-designed for those with four-legged family members since it is one of the few places in the city that has a dog-friendly beach area. You'll also find cabana rentals and kayaks at Montrose.

The iconic "bean" sculpture, (Anish Kapoor's 110-ton Cloud Gate), in Millennium Park has been drawing visitors since the park was completed in 2004. It has 24 acres of landscaped flower displays, free concerts, outdoor movies, and curated garden walks. Besides the lively event calendar, residents can find exercise programs, art programming, and special event space available to rent. While you're there be sure to check out Crown Fountain and its interactive art display. According to the Millennium Park Foundation, "Crown Fountain uses numerous design elements including water, light, and glass to create a unique meeting point and reflection space. Though not originally constructed as such, the Fountain has become an interactive summer urban oasis for families and visitors who take refuge in the space during Chicago's humid summers." So, if you are there between May and October, give yourself some time to splash around the exhibit.

Still Considering a Move to Chicago?

If the pizza in Chicago isn't reason enough for you to relocate, maybe the hot dogs and Italian beef will convince you. All things considered, it's not just the food scene that makes Chicago a promising place to relocate. Gorgeous lake views, abundant job opportunities, and a rich history all make Chicago a great place to live. If you think you can survive the cold winters, and you like the idea of living in a major metro area, Chicago may be the place for you.

College HUNKS Hauling Junk & Moving can make your move to Chicago effortless. Our moving professionals have the expertise and experience to move you safer and quicker at affordable rates. Contact us for a free estimate for any of our services.