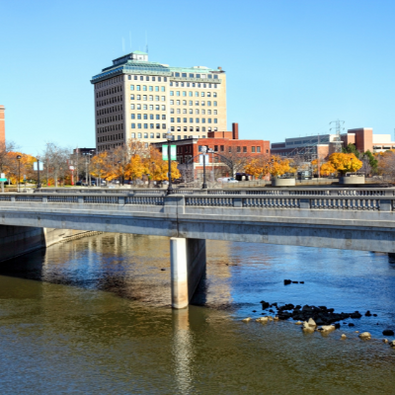 Everything You Need to Know Before Moving to Flint, MI.

Is it possible for a city to have good food, several top colleges, a string of top-class music venues, plenty of affordable housing units, and a ton of other surprises?

In the case of Flint, MI, the answer is a resounding "yes."

Since its establishment in 1819, Flint has quickly transformed into one of Michigan's fastest-growing hubs of manufacturing, health care, art, and outdoor activity. So, if you're thinking of relocating to Flint, you have the right idea. Whether you're already planning on moving to Flint or you're still weighing your options, there are a few things we'd like to share with you before you pack your things.

Here at College HUNKS Hauling Junks & Moving, we've put together a thorough list of things to know about living in Flint. We like to think of it as the "ultimate guide to moving to Flint, MI." We're pretty proud of it—enjoy.

Living in Flint: The Basics

As for Flint's median household income, it's approximately $28,834. That's considerably lower than the national average, which currently stands at $67,521. That shouldn't worry you, though. As you'll find out in the next section, the pricing for basic commodities in Flint somewhat justifies the income.

The Cost of Living in Flint

Thankfully, you won't have to pay an arm and a leg to afford the lifestyle in Flint. According to data from Livingcost.org, the average cost of living in Flint is $1,234. For context, Michigan's average is $,1665 while the U.S. average is $1,951.

As for rent, a one-bedroom apartment in downtown Flint goes for $650. Move further away from the city center, and you'll find a good apartment for as low as $570.

Of course, the prices will be a bit higher if you decide to bring your family along. But they'll still be within reach.

With a median home price of $29,500, the cost of owning a home in Flint is considerably lower than the rest of Michigan. Utilities are quite affordable, too. The utility bill for one person is around $106.67 per month.

The top industries in Flint are health care, manufacturing, energy, and education. As for the average monthly salary, it's around $4,795.

For some, it's possible to live in Flint without a car, but it's definitely not ideal for most people. After all, Flint's average walk score is only 43. Now that you've been advised, if you decide to go without a car, here are your best options:

Wondering what parking options are there in Flint? Well, there are dozens of them. For starters, downtown Flint provides street parking starting from $1 an hour. Popular parking spots include Downtown Flat Lot and Rutherford Parking Garage, both along Kearsley Street, as well as Riverfront Parking Garage along Beach Street.

Where to Live in Flint: The Lowdown on the Best Neighborhoods for You

Before we dive into this section, we'd like to point out that education opportunities in Flint abound. From kindergarten through college, Flint's learning institutions are among the best in Michigan.

As far as colleges go, there's the popular University of Michigan-Flint. There's also Kettering University and Mott Community College. When it comes to highly-rated public schools, Flint has tons of them. There's Kearsley High School, Armstrong Middle School, Leota Fiedler Elementary School, among others. Check out this guide for more insights on Flint's top public schools.

With that said, let's now look at the top neighborhoods in Flint.

With a working-class vibe and proximity to shopping centers, supermarkets, and water, Grand Blanc is great for families and young professionals.

Linden is one of those neighborhoods that hasn't always gotten the attention it deserves, and because of that, some lucky buyers found beautiful homes for well under $30,000. But not the case anymore. Since the early 2000s, people have been flocking to this area, and now it's a fairly tight-knit community consisting mostly of upper-middle-class families and senior citizens.

Located along Flint River, the county's oldest river, Flushing is one of the area's oldest—and coolest—neighborhoods. Many of the older homes—think of two-story wraparound houses—have been completely restored, and there's also a nice mix of ranch-style homes, condos, and apartments. The area is known for its restaurants, nature trails, and boutiques.

Because of its coolness factor among young professionals and its trendy restaurants, this neighborhood has been on the rise. You can still find a reasonably priced apartment in Downtown Flint, but that's changing quickly.

What to Do in Flint: Nightlife, Culture, and Art

When it comes to places to visit and things to do in a city you've just moved to, the dilemma for many is if (and when) to visit the touristy destinations.

As a visitor or a local, Downtown Flint is difficult to avoid, since there's so much to enjoy. Yes, there are tourist destinations, such as the famous Applewood Estate, Riverbank Park, and Buckham Gallery. But then there's also places like Greater Flint Arts Council, Perry Archives, and the Flint River Trail.

There are also a variety of dining options around Downtown Flint, such as Xolo, Sweet Peaces Veggie Bistro, and Cork on Saginaw. And if you love shopping, there's a wide variety of specialty shops and clothing stores.

As for the nightlife in Flint, it's anything but sleepy. Popular bars and nightclubs in the area include The Eberson, Kickers Sports Bar & Grill, Arrowhead Vets Club, Cruisin, and Z Club.

For fans of live music, we recommend you check out Flint Local 432. This all-ages music venue is where people go to see bands before they blow up. If you want to see a variety of acts all in one place, the Flint Drop Fest should definitely be on your list.

The Weather and Outdoor Activities in Flint

As with the rest of Michigan, Flint experiences all four seasons. Summers are warm and humid, the winters are freezing, windy, and snowy, and it is partly cloudy all year round. Over the course of the year, the temperature typically varies from 17°F to 82°F, and it's rarely above 90°F or below -1°F.

Beautiful weather and fantastic outdoors go hand in hand, and that's exactly what Flint serves its residents. If you're a hiking enthusiast, you'll love it at the Flint River Trail, a 17-mile trail that's part of the Michigan Iron Belle Trail System and runs through downtown Flint north to Richfield County Park.

You can't claim to have explored Flint's outdoors without exploring Flint River. It's literally the heartbeat of Flint and Genesee County. Stretching through forests, communities, and manmade lakes, Flint River is where you'll want to spend your summer weekends with family. Canoeing, kayaking, fishing, and birding opportunities abound along its shores.

If you'd rather unplug and connect with nature than spend time in the water, then you'll definitely want to be in one of Flint's many campgrounds and RV parks. There's the Covenant Hills Camp & Retreat, Holly Recreation Area, Ortonville Recreation Area, among others.

For those who love slathering on sunscreen and digging their toes on warm sand, there's Clover Beach on Byram Lake, Buttercup Beach on the Holloway Reservoir, and Bluebell Beach on Mott Lake.

If you are moving to Flint, MI, from just across town, all you have to do is update your mailing address, and you're good to go. You can submit a change of address online or by using a mail-in change-of-address form.

However, if you're moving to Flint from another state, there are a few logistics you'll have to iron out before settling into your new home.

First off, you'll have to change your license and register your vehicle at the Flint Secretary of State office. There's a self-service station inside the office, meaning you can print a temporary driver's license on the spot.

If you did not register to vote when you changed your address on your Michigan driver's license, be sure to register via the Michigan Online Voter Registration System.

Lastly, don't forget to update your address to reflect your new city. You may submit a change of address online, at a Secretary of State office, or using a mail-in change-of-address form.

The Pros and Cons of Moving to Flint

Traffic is not a problem: One thing that's definitely a pro when it comes to living in Flint: you won't have to worry about getting stuck in traffic very often. The commute time averages out to 22.9 minutes. That's considerably lower than the U.S. average of 27.6 minutes.

The food: The food in Flint is amazing, especially when it comes to Central American, South American, and Chinese cuisine.

First-class healthcare: Flint has got some of the best healthcare facilities in the whole of Michigan. McLaren Hospital, for example, was recognized by U.S. News & World Report as a top 10 southeast Michigan hospital in its 2019-2020 Best Hospitals ranking.

Art at its finest: Art is such a big deal in Flint. The Flint Institute of Arts, for example, contains more than 8,000 works of art. Visitors and locals can check out everything from Post-Impressionist paintings to the works of Mary Cassat.

Need Help with Your Move to Flint?

Between the weather, the vibrant education scene, the low cost of living, and the majestic outdoors, we think Flint could be the perfect spot for your next move.

If you decide to take the plunge, don't hesitate to reach out to the honest, friendly, and professional movers at College HUNKS Hauling Junk & Moving. We facilitate city-to-city relocations and cross-town moves, and we would love to help.

And if you're looking for helpful recommendations or up-to-date moving tips, feel free to check out our Moving Resources.