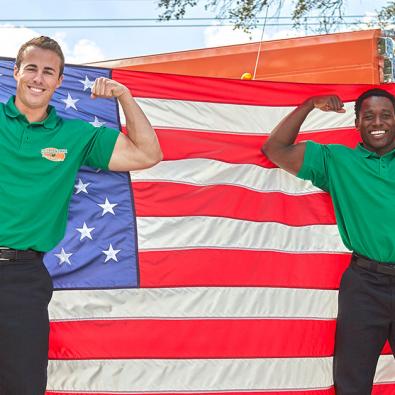 It’s no big surprise that US military veterans expect to succeed at whatever they take on. With the training and discipline needed to defend our country and work in challenging situations, veterans make great College HUNKS Hauling Junk & Moving franchise owners. College HUNKS franchise opportunities are tailored to the military mindset with thorough and extensive training, in conjunction with a team of ongoing support staff to continue to be ready and available for questions and assistance in all aspects of the College HUNKS. franchise process.

College HUNKS Director of Franchise Development is a Proud Veteran

Dana Hansen, Director of Franchise Development for College HUNKS Hauling Junk & Moving is a veteran himself. He proudly served in the US Air Force during the Gulf War and comes from a long line of military experience including both of his grandfathers who served in World War II, his father who served in the Army during Vietnam, as well as both of his brothers who served in the US Navy and the Marine Corps. Nobody understands how well our veterans are suited for College HUNKS franchising as Hansen does, “I’ve been in franchising for over 15 years both a franchise coach and working with another franchisor. When I accepted the offer to join the brand, the first thing I did was reach out to the current franchisees to get to know them. I was thrilled to learn that there were so many veterans in ownership roles and wasn’t surprised that they were among the most successful owners based on my military experience. Veterans are extremely great at motivating young men and women, building leaders, excelling in a structured system and executing the game plan.”

Not Afraid of Work

Additionally, military veterans aren’t afraid of physical labor and are generally in good physical shape for moving objects from one place to another with ease for managing a busy office and promoting their businesses. College HUNKS prides itself on providing a stress-free moving experience and taking control of moving situations while demonstrating their proficiency and improved efficiency, leading to an exemplary customer experience, which leads to referrals and return business. With a lot of small movers within any given area, why not strive to be the one that stands out from the competition with a sharp image, customer-focused service, and stellar work ethic.

It’s no surprise that one of the franchisees Hansen bonded with was another Gulf War veteran. Based in Wilmington, NC, former Army Attack Helicopter Pilot and Bronze Star recipient, Jeff Moss, made company news when his franchise grossed the highest sales in the company’s history in the first month in business. Featured in Entrepreneur Magazine, the veteran/former manager of pharmaceutical sales also reached $100,000 in sales in a single month sooner than any other College HUNKS franchisee. To top it off, Moss reached the one-million-dollar mark in sales in his first year in the moving business.

According to Entrepreneur, Moss credits the success of the business he opened last year to his military training, saying that “veterans generally have an incredible work ethic, with a ‘failure is not an option mentality.’” As an example of how veterans thrive in the College HUNKS business model, Moss says in his LinkedIn profile, “I've got my own thing now.” Coming for a position where he felt his career’s success or failure was at the mercy of large corporations downsizing or restructuring, Moss went on to say that he decided to take control of his future and wishes he had acted sooner. He said, “Success or failure is a combination of the strength of the economy, my drive & determination, my entrepreneurial will, and the professionalism and performance of our team - my wife and I own our business and we have something that we can sustain our future with.”

Veterans’ ethics match what College HUNKS is seeking to do in the moving industry. Often, veterans experience difficulty with the substandard performances and attitudes rampant in the private sector of today’s business world. At College HUNKS, our mission is to unify the moving business and set higher standards, offering stress-free moving experiences, complete with movers that listen to the clients’ wishes, go above and beyond for their customers, and gain their customers’ trust in a matter of minutes. Veterans can align their strengths with these values and make their franchises successful, fun places to work and to manage.

And, most importantly, we thank you for your service.