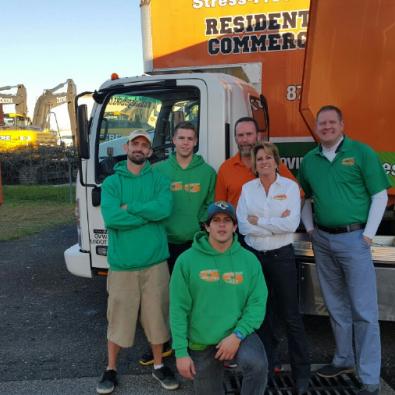 Lisa Tully found her fit as a College HUNKS Hauling Junk & Moving franchise partner back in 2014; she launched her business in February 2015 and has built it exponentially ever since. Recently profiled in Franchise Consultant Magazine, she is one of the top 10 producers in College HUNKS 130-strong and growing franchise network. Lisa’s husband, Bryan, and son, Russell, have joined her highly successful business venture based in Jacksonville, Florida which now comprises three College HUNKS Hauling Junk & Moving territories, 65 full- and part-time employees, and a 15-vehicle fleet.

Intrigued by College HUNKS’ catchy name when she first saw the company’s booth at a franchise expo, Lisa was deciding among numerous franchising concepts at that time. After speaking to College HUNKS’ Co-founders Omar Soliman and Nick Friedman as well as at least 12 current franchisees, she says she was sold – even before visiting the company’s headquarters to receive in-depth information. The concept, business plan, and fun-focused culture that emphasizes mentoring, business success, and giving back to local communities were all aspects of College HUNKS that greatly appealed to Lisa. Her business provides the personal and professional fulfillment she was looking for when she decided to leave her corporate role as an executive in the IT industry.

She is equally comfortable in her role within the traditionally male-dominated junk hauling and moving industries as she was in IT, which is also considered to be male-dominated. “Strong female franchisees flourish within our culture and system,” notes Dana Hansen, College HUNKS Hauling Junk & Moving’s director of franchise development. Succeeding with her College HUNKS franchise was easy, according to Lisa, “We invested in a franchise for a reason. We just stick to their system and it works,” she says.

Lisa also markets her business locally by parking trucks and placing signs in visible locations as well as having an employee dress as the College HUNKS mascot, CJ, and wave to people on busy streets. Also, her team participates in many local events that benefit charitable causes, including breast cancer fundraisers and loading trucks that deliver food to underserved communities. “I finally feel great about what I do. You’d be hard-pressed to find such a mission-driven company in corporate America,” Lisa told Franchise Consultant Magazine. “With this business, we have opportunities to really make a difference. That’s the icing on the cake.”

Are you interested in learning more about the College HUNKS franchise opportunities currently available? Contact our franchise development team today and you’ll be on your way to success before you know it.