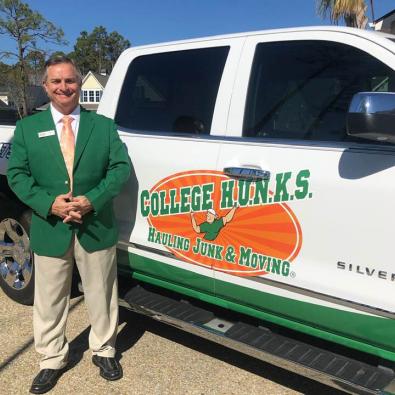 Franchise Success Story: Jeff Moss and His Journey to Owning and Operating a College HUNKS. Franchise

On June 11, 2018, Jeff Moss opened his College HUNKS. franchise in Wilmington, NC. Moss earned his degree in agri-business and agronomy from the University of Georgia prior to serving in the Gulf War on the front lines during Operation Desert Storm. After pursuing a career in the pharmaceutical field, he decided to shake things up by owning a College HUNKS. franchise. Jeff Moss made company history in July 2018 by grossing the highest sales for his first month in business. The former Army Attack Helicopter Pilot and Bronze Star recipient then went on to soar to $1,000,000 in sales in his first year in the moving and junk hauling business with College HUNKS.. We reached out to Jeff to find out more about him and the strategies that led to his overwhelming success right out of the gate.

We’ve been in the Wilmington area for 5 or 6 years. I worked as a District Business Manager for Novo Nordisk in the coastal Carolina area. I felt I was always at the mercy of corporate America and when I got downsized, I saw the opportunity to open the franchise and we went for it.

One of my friends, Roger Panitch, owns a location in Atlanta, GA and he informed me that College HUNKS. spends time building leaders and that appealed to me. After that, I decided that it would be a great idea for me; Roger encouraged me to start a location.

We’re currently working with a local high school and became an athletic booster so we have signage at the school. Some of the football players are working with us now and we’re very involved with them and helping them.

Now, that’s a multi-faceted question. Tons of things to be excited about, building something from scratch is a great sense of satisfaction – my wife and I own our own business. I came from pharmaceuticals where it was a little difficult to control my day to day – now I’m more in control of my life and my business – I love to drive the agenda, spending time with these young men and helping them grow and learn. We are able to readily solve the problems that come up. The most challenging thing is dealing with personnel issues that happen in all businesses – constantly recruiting, training/coaching.

Not sure what owning your own franchise location would entail? We’ve got answers!

If you’re interested in College HUNKS Hauling Junk and Moving franchise opportunities, please reach out to our team. When asked if he would open a College HUNKS. franchise again, if he had it to do over, Jeff Moss said, “I would have done it sooner!”