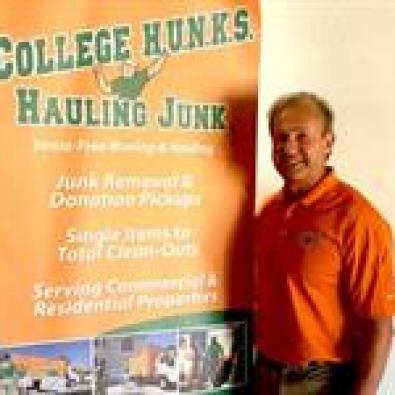 As usual, the newest Hunks come from a wide variety of backgrounds. These include a former lumber trader, a massage franchise owner and a serial entrepreneur who has started and sold several successful companies. 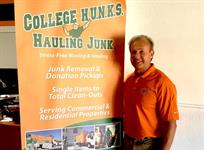 Rob Rudow had been very successful in business long before joining College Hunks and was actually retired. He had sold a distribution corporation that he had owned for 14 years. He had also been successful in commercial real estate, but when it came time to find his next adventure, Rudow was looking for more than just profits. He wanted to find a business that would mesh with his desire to mentor disadvantaged youths and help create future leaders. How important was that in his decision to join College Hunks?

“Very important. I liked the message. A big, big thing for me that I did my entire career is mentoring. I like to help young people move on in their lives. I’ve always said that people try to take round pegs and insert them into square holes. If you take the time to develop that round peg, they can really flourish. That’s been a huge piece of my personal goals, to mentor young people. That’s a big thing. The other thing is, I actually see the revenue stream. It was an effective purchase. The cost of getting into business wasn’t overwhelming compared to some of the other franchises, and the return on the investment is much shorter term than some of the other investments I’ve looked at.”

Before joining College Hunks, Mike Slater had a long career as a wholesale lumber trader, buying and selling mass quantities of framing lumber, studs and other commodity building materials for a national company. Having retired from corporate life, it wasn’t long before Slater realized that retirement didn’t suit him. He went looking for a business to get involved with that would give him a good work and personal life balance that had been missing in his previous work experience.

“[Founders] Nick and Omar have done a fantastic job. They’ve laid it out very easily for me to follow and I’d be a fool not to follow what they’ve done because this is the right way. I see pieces of their process and platform way of doing business in other companies, but I’ve never seen it all put together the way they’ve done. It’s fabulous. I have no doubt in my mind it’s going to be successful, but more than that, we’re going to turn out some good future leaders in the years to come,” said Slater regarding what he found so appealing about College Hunks Hauling Junk.

Guillermo Hernandez knows a thing or two about being an entrepreneur. He’s been creating businesses ever since he was a kid, when he was not able to afford the same kind of fancy bicycle his friends had. Instead of feeling sorry for himself, Hernandez set about collecting the parts needed to build a bike of his own, using money he earned from doing chores and odd jobs around the neighborhood to fund the enterprise. By the time he finished, his new, self-made bike proved so popular among the neighborhood kids that he started taking orders and building custom bikes for anyone willing to pay. And so, an entrepreneur was born.

Many years and several successful businesses later, Hernandez is still at it. Only this time, he has decided to add a junk removal franchise to his portfolio. Being a numbers guy, he really did his research and liked what he saw in College Hunks. He says of co-founders Omar Soliman and Nick Friedman, “When I met Nick and Omar, I felt that they were colleagues in the way that I was able to talk with them, the way that they understand. Even the business books they’ve read were the same ones I had read. They really engage people, and the elements of the business are extremely organized and work together very well.”