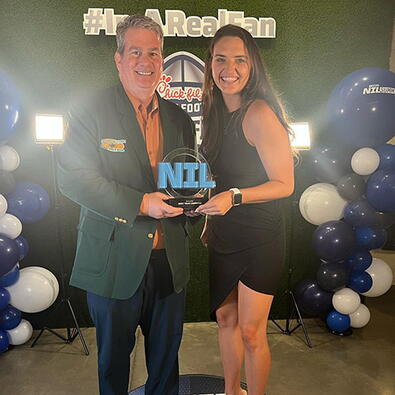 College HUNKS was recently recognized for excellence in collaboration with teams of student-athletes. The full-service moving company with locations across the U.S. and Canada received the Best Team Campaign award at the NIL Summit hosted in Atlanta. Local Franchise Owner Roger Panitch and College HUNKS Marketing Coordinator Mackenzie Cann, who was a D1 athlete and played for the University of Kentucky, received the award on behalf of the organization.

"Since the NCAA opened the opportunity for organizations to support and partner with student-athletes, we jumped at the moment and were one of the first to sign a deal. We've been steadfast to our core value of building leaders and have endorsed various teams over the past year," said Nick Friedman, Co-Founder and Visionary of College HUNKS. "We are honored to receive the Best Team Campaign award and to be recognized for our efforts in helping shape the future of college athletics and the individuals who commit themselves to be the best in their sports and beyond."

The Best Team Campaign award recognizes a brand or organization that showed excellence in collaboration with a team of student-athletes at one or more schools, and across multiple media channels to generate maximum impact and consumer conversation. The award was presented at the NIL Summit as part of the NIL Awards, which brought together student-athletes, brands, creators and storytellers to recognize those who demonstrated outstanding achievement, innovation, creativity and leadership in Name, Image and Likeness.

The NIL Summit was built by student-athletes, for student-athletes. The Summit is an immersive multi-day professional development experience and gathering place for college sports' most important stakeholders to share cutting-edge ideas, discover new interests, and learn how to maximize NIL opportunities to build their brands and amplify their voices.