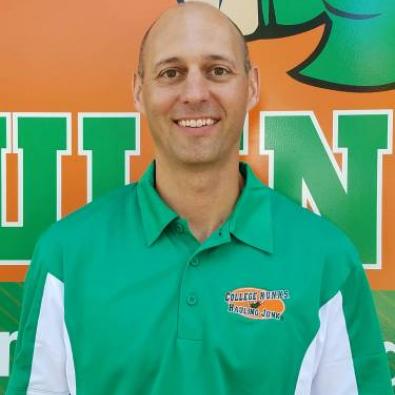 Businessman jumps off the corporate ladder to open a College Hunks moving franchise in the St. Paul area

Many people get fed up with climbing the corporate ladder, but few actually do something about it. One person who did just that is Jeremy Knospe, who recently opened a College Hunks Hauling Junk and Moving franchise in the St. Paul, Minnesota, area.

After several years with a large corporation, Jeremy was ready to find a new challenge and re-take control over his own life. The trick, however, was finding an opportunity that meshed with his career experience.

This is his story.

What cities and neighborhoods will you be serving?

You must be anxious to get started!

Yes, my junk hauling truck will hopefully be arriving next week. The moving truck is on its way as well but will not be here until later in July. So, I’ll be renting a truck in the meantime.

What was your career before you decided to get into College Hunks?

Really it has been three careers. Right out of college I started a landscape design installation company, which I owned for about 5 years. It went well but I sold it when I got married and got a job as a Project Manager for a residential light commercial construction company here in western Wisconsin. I did that for about 5 years, and then in 2007, there was a downturn in the housing market, so I went for a more stable job at a large, national facility services company. with over 100,000 employees. So, it was a big difference going from 10 years in small business to 10 years in big corporate America. I worked for all kinds of different customers like airports, the Postal Service and universities. I spent the last couple of years working for a single client, UnitedHealth Group, as a national account manager for them. It was a large job and a great job. I was making a lot of money and enjoyed learning all of the different components that were necessary to get the job done, but it wasn’t fulfilling for me in a lot of ways.

What was lacking about it?

A lot of things. But a big thing was a lack of engagement in my community due to the long commute. I commuted all the way to the other side of the Twin Cities Metro area to my office, about 55 miles each way right through the heart of the Twin Cities area. It took me at least an hour to get there and at least an hour and a half to get back, so you add that on top of a 9- or 10-hour day and it gets to be pretty draining. So, I really wasn’t engaged with the community there, other than my work, and by the time I got home I didn’t have much energy left to be engaged in my community, either.

How did you decide you wanted to look into owning your own business again, specifically franchising?

I had started a business from scratch before and I really wasn’t interested in reinventing the wheel this time, especially since launching a new business is so all-encompassing if you don’t have some sort of template to go off of. So, right away I thought about doing a franchise. Also, since I have 3 kids and a wife, I wanted to make sure that I had the ability to spend time with my children and attend their activities as well.

How did you find out about College Hunks?

I had actually done some research on my own was looking for a company that fit my skill set and all my other objectives. My career had always been the service industry, like landscaping, building houses and facility services. I really figured I should stay in that lane, so I looked at different franchises that were in the service arena and one of those was College Hunks. After that I also contacted a broker and College Hunks was one of the companies he picked out for me as well, so we took off from there.

What is that you liked about College Hunks?

I liked a lot of things about College Hunks. I was impressed with their brand and logo, which is very catchy and bright. The culture is good. I really liked the founders’ approach on the business and the ability to make a successful brand in a market. I was also impressed with the business model itself, the scalability and multiple revenue streams. That last one was a major draw for me.

What do you like about the multiple revenue streams?

To me, having multiple revenue streams is kind of like hedging your bets, as well as creating more opportunity. If one service doesn’t work as well in my market, maybe the other one will be more beneficial. Also, I have been in business long enough to know there are ebbs and flows, so it’s better to have multiple revenue streams to help offset any slump one of them may have.

So, junk hauling and moving, but what else?

Well,  labor services, for example. I see many avenues for additional revenue streams beyond what you would call junk hauling and moving. The labor is another component that can really help set us apart. We can satisfy many types of customers and fill my employees’ schedule at the same time. I think a great example would be, for instance, if we had a relationship with a Realtor. We could operate moves for them, help stage houses, or just assist them with tidying up or whatever the case might be. Really, just about anything on the labor side, as long as our people have the skillset to get the work done, I think there is opportunity in that.

How has the support from College Hunks been?

The support has been pretty good; the franchise training was very good. I enjoyed that a lot. They give you documentation and materials with some forms and reading material and books and quite a few things like that. They give you a startup coach, whom I have a one-on-one with at least once a week, if not more. There are some fellow franchise owners who have helped me out as well.

A lot of people talk about College Hunks having a really unique culture and really strong core values. Would you agree and, if so, what has really resonated with you?

I would agree with that. I do believe that they have a strong culture, and maybe that is partially because they bring people who value that strong culture on board. I am happy with the brand, and it has exceeded my expectations in many areas. I think it is energetic. I like that there is a lot of drive from the employees, especially at Brand Central. It’s cutting-edge in many ways, especially their philosophy and their approach to business, which is to create a fun environment. I enjoy that having just come from corporate America, where energy and fun are generally squeezed out of everything you do.