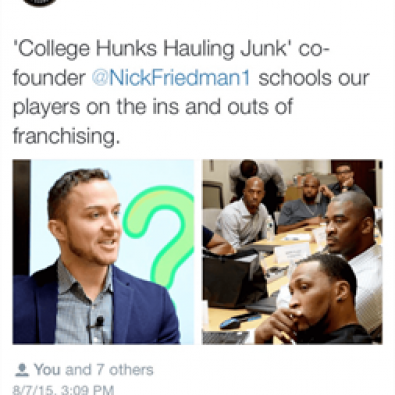 Professional athletes like to put up good numbers, so when they heard about College Hunks’ success, they wanted to know more 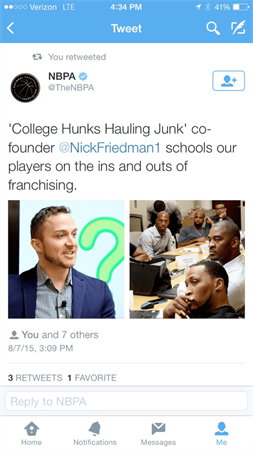 One of the ways the National Basketball Association helps its athletes succeed is by preparing them for a life in business after they retire from the court. At a recent NBA Players Association entrepreneurship boot camp, a group of current and former all-stars got the inside scoop on evaluating and selecting a solid franchise opportunity, as well as the College Hunks Hauling Junk and Moving franchise story, straight from co-founder and President Nick Friedman.

“When these guys come together, they want to learn about the best opportunities out there because they want to invest their hard-earned money in a sure thing,” says Nick, who gave a two-hour, keynote presentation in New York City. “I always enjoy the opportunity to provide insights on how to assess and evaluate franchise options, and it was an honor to be invited.”

Nick spoke about the franchising world in general, and then used his own experience to highlight some specific ways a franchise can be monetized. For example, one major point he made to the players was how a College Hunks Hauling Junk and Moving franchise can be a single business, or it can be the anchor in an expanding chain of locations. That same owner can also grow in place by offering many types of moving and removal services, such as the Trash Butler pick-up option for apartments and condominiums — expanding within a territory.

“I talked about how many of our franchise partners begin with just doing removal in a set territory, and as time goes on they begin to look at adding on services and maybe even picking up a new territory,” Nick explains. “Our moving and junk removal franchise business is scalable, and so success can build upon itself.”

Not all franchises are the same. Here, College Hunks Hauling Junk and Moving co-founder Nick Friedman spells out what makes our moving and junk removal franchise special.

“Nick painted a realistic picture of how to envision and build a successful business — starting from a basic idea and then growing it into a profitable enterprise, which then can be replicated through franchising. It is a great case study for our players,” says Deborah Murman, Director of Career Development for the NBA Players Association.

The combination of hard work and capitalizing on opportunity is something that a professional athlete knows well. The players are very community-minded, and they get involved with young people through their own foundations, as well as those run by the NBA. Given College Hunks’ unique company culture that focuses on team-building and excellent, reliable service (not to mention having fun), it’s no surprise that Nick got a very welcoming reception.

“The guys were really enthusiastic when I talked about how our model isn’t just about moving and removal, but about plugging into the community and serving as a mentoring opportunity for young people,” he says. “At College Hunks Hauling Junk and Moving, we want to move the world in every way possible, and that’s something these guys can really get behind.”